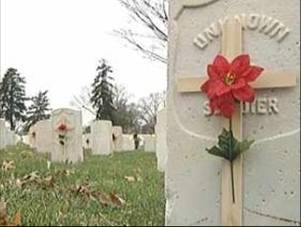 St. Louis honored the unknown soldiers at Jefferson Barracks National Cemetary this weekend for Christmas, as seen on News Channel 5:

It was an emotional Saturday morning at Jefferson Barracks National Cemetery. Dozens of volunteers spent hours putting christmas decorations on the graves of thousands of unknown soldiers.

Crosses were placed on the graves of fallen soldiers. Men and women who died for our nation’s freedom. Their identities remain a mystery while their legacies live on, beyond the grave.

One woman organized the all volunteer effort. Among those gathered, a navy veteran. He said he enjoyed the opportunity to take part in the moving event. That contagious spirit spread to each of these volunteers walking among rows of unknown soldiers.

One by one, crosses were carried to headstones and placed into the ground. They were left to pay tribute to heroes. Korean war veteran Joseph Schaper was injured in combat. He volunteered Saturday, thinking of fellow soldiers who didn’t make it home.

Adults, as well as children like Jack Meyer, took part in the event. Proof that even the smallest americans understand the sacrifices made by soldiers they’ve never known.