The Dogtown Democrats are upset with Ex-Alderman Bauer’s use of an ass. 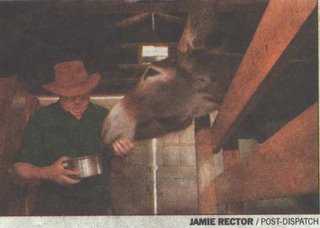 Alderman Tom Bauer tends to his new donkey, Dan, in the animal’s stable behind Bauer’s house in the Dogtown neighborhood. Bauer’s neighbors have grown accustomed to his riding his pet down the city streets. (STL PD 2002)

St. Louis City Democrats are upset that recalled Alderman Bauer is running for re-election as an “independent democrat” and still using his donkey in his campaigning:

St. Louis Democrats have a message for anyone thinking about borrowing their mascot – don’t mess with the donkey.

Party leaders say their big-eared, high-kicking party symbol has been co-opted by a candidate who is not really one of them. The city Democratic Central Committee sued ousted Alderman Tom Bauer this week, challenging his use of the donkey image on campaign signs and in ads.

“This isn’t a funny story,” insisted St. Louis party Chairman Brian Wahby. “This is important stuff – how dare this guy.”

Never mind that Bauer has carried the Democratic banner in the state Legislature and as an alderman. Or that he is well-known for campaigning on the back of a real donkey.

The donkey “has been a recognized symbol of the Democratic Party nationally for 125 years or more,” the lawsuit says.

The suit does not allege any copyright or trademark infringement but does say that the donkey is the “certified emblem of the Democratic Party in Missouri.”

Bauer, who represented the 24th Ward, says the suit is much braying about nothing. He was recalled from office earlier this year and is running in a Dec. 13 special election to get his seat back.

Election laws say Bauer can’t appear on the ballot as a Democrat because the local party nominated someone else. Technically, he’ll be nonpartisan.

Democrat or not, Bauer maintains his donkey can stand on its own – literally.

Bauer was recalled in September amid opposition to an eminent domain proposal and other projects.