“After being tortured or beaten, women prisoners gave birth to dead babies, whose bodies were thrown into the common courtyard and left there. Children were tortured in front of their parents, parents in front of their children.”

First live witness against Saddam breaks down in court while recalling the horror from the former regime. 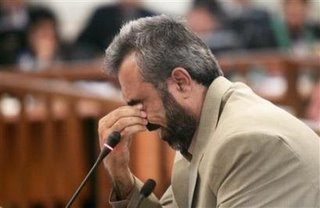 The first witness in the Saddam Hussein trial tells of village massacre:

The first witness to speak in person at the trial of ousted Iraqi leader Saddam Hussein has spoken of arrests, torture and murder in a Shia village.
Ahmed Hassan Mohammed detailed the killing of 148 people in the village of Dujail, north of Baghdad, in 1982.

As he went through his emotional, artless story, Saddam Hussein sat close to Mr Mohammed, only a few feet away, making occasional notes, toying with his reading-glasses, sometimes looking up sharply at him, or asking him questions which the senior judge refused to allow.

The defense team walked out of the court room when Ramsey Clark (history here) was not allowed to make a statement. After being told that they would be replaced they decided to return.

Saddam at one point stood and screamed at the judge. 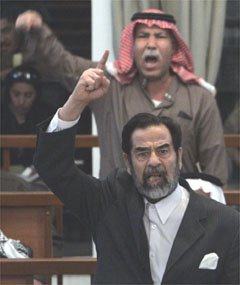 Ramsey Clark was silenced by the judge and told to keep on point:

“Reconciliation is essential,” Clark told the court. “This trial can divide or heal. Unless it is seen as absolutely fair, and fair in fact, it will divide rather than reconcile Iraq.”

At that point the judge reminded Clark that he was to speak only about the security guarantees for the defense lawyers — two of whom have been assassinated since the trial began Oct. 19.

Clark then said all parties were entitled to protection and the measures offered to protect the defense and their families were “absurd.” Clark said that without such protection, the judicial system would collapse.

Major K. has unique perspective on the situation in Iraq.