From Iraq the Model. 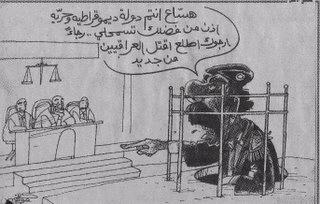 “Now you are a nation of democracy and freedom, so would you kindly, if you don’t mind…please, I beg you to let me out so that I can kill some Iraqis again.”
(The late Mo’ayad N’ima )

This has got to be the ultimate convoluted twist of moral equivalency!

After hearing testimony from terrified Iraqi’s hiding behind a curtain to keep their anonymity from the thugs who slaughtered their friends and relatives in meat grinders, Saddam Hussein, the Butcher of Baghdad, shouts at the court because he had been deprived of a shower and exercise facilities, “This is Terrorism! and “I will not return. I will not come to an unjust court! Go to hell!”

The Iraqi woman was 16 at the time:

“She was 16 years old when she was arrested in the Shiite Muslim town of Dujail after a 1982 assassination attempt against Saddam.

She refers first to Wadah el-Sheik, a military intelligence officer who died last month of cancer:

Wadah el-Sheik summoned me, may God bless his soul. Anyone who dies, may God bless their souls. He told me, “What do you have to say?” I told him, “Nothing.”

He told me, “Shut up. Don’t dare mention my honor.”

“He hit me and shot at the wall with a pistol. I thought it was real, but it turned out to be just a sound. I was forced to take off my clothes, and he raised my legs up and tied up my hands. He continued administering electric shocks and whipping me and telling me to speak. They were more than one, as if I were their banquet, maybe more than five people, all of them are officers. Is that what happens to the virtuous woman that Saddam speaks about?”

And, yet poor Saddam did not get a shower! How surreal!