AL SHARPTON IS NO FRIEND OF THE POOR WITH HIS NEW TV GIG,
VIDEO HERE 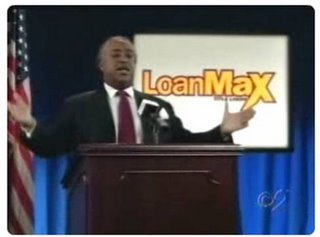 Al Sharpton is helping poor people get quick loans for cars. But, don’t let yourself be late with a payment or you’ll find yourself walking!

CBS2 has more on the story:

“When I’m out fighting for the little guy and I need quick cash I find comfort in knowing that LoanMax is here for me,” the Rev. Al says in a new commercial.

Asked by CBS 2 about the ad, Sharpton said: “I don’t understand why it’s wrong for the little guy with no credit not to be able to get money.”

Critics charge LoanMax takes advantage of the “little guy.” Keith Corbett, senior vice president of the Center For Responsible Lending in Washington, said, “They charge triple-digit interest rates and the terms are so that the person can’t really pay the loans back without doing harm to themselves.”

When CBS 2 called the company we were told we could get a loan “in 10 to 15 minutes.” But to get the loan the company would need the title to the car and an extra set of keys. The interest rate? Try a whopping 372 percent per year.

“If you miss one payment your car could be repossessed,” Corbett said.

The company is so bad that it is even banned in Al’s home state of New York:

Sharpton is plugging Georgia-based LoanMax, which gives cash to customers who put up their cars as collateral — with monthly interest rates as high as 30 percent, which can balloon to 360 percent annually.

Al is also working on a sitcom called “Al in the Family” about conflicting social and political views with a social message. There is currently no word on if that social message will cover the loan shark business.