“Our victory as a government, our real victory, is that the election process included all political groups,” al-Jaafari said. “Those who have complaints should contribute to this feeling and to be confident that their complaints will be listened to.” 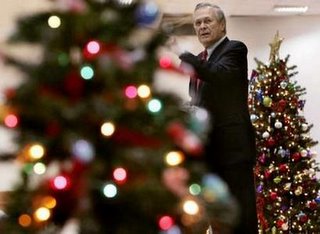 U.S. Secretary of Defense Donald Rumsfeld addresses soldiers during a Town Hall meeting in Fallujah, Iraq, December 23, 2005. Rumsfeld made the trip to Iraq to thank soldiers for their work prior to the holiday season and announced a reduction in the size of the U.S. force in Iraq by two combat brigades by next year, taking the number of troop levels to below 138,000 which existed prior to the recent presidential elections. (REUTERS/Jim Young)

The Shiite majority reached out to the Sunni Arabs today for talks on building a coalition government in Iraq:

Religious parties based in Iraq’s Shiite majority called on Sunni Arabs to accept the election results and consider joining a coalition government after the final results are released in early January.

“We are very close to our Sunni brothers, more than other groups, and with them we can form a national unity government,” said Bahaa al-Din al-Araji, a senior member of the United Iraqi Alliance.

“These results reflect Iraqi reality and they have to accept this reality,” he added.

“There is real progress, there is something to build on even in the most hard Sunni Arab places such as Anbar. We would like a government that capitalized on that and which fosters a sense of national reconciliation,” Ford said.

Washington hopes broader political participation will weaken support among Sunni Arabs for the Sunni-dominated insurgency, which would strengthen security and allow U.S. troops to begin leaving.

Robert Mayer at Publius Pundit carried the news earlier about the Sunni and secularist Shia protests contesting the elections.

Iraq the Model also carried news of the election disputes.

Today the International Monetary Fund cleared a 685 million dollar standby loan to help Iraq get back on its feet. 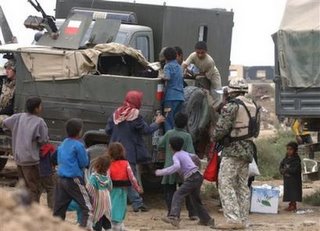 Donald Rumsfeld on a visit to Iraq today announced that US combat troops would be scaled down to 130,000 from the baseline number of 138,000 early next year.

Meanwhile today in the Netherlands, a Dutch arms merchant who sold Saddam chemicals was convicted of war crimes. The Hague Court claimed Saddam waged genocide against the Kurds.