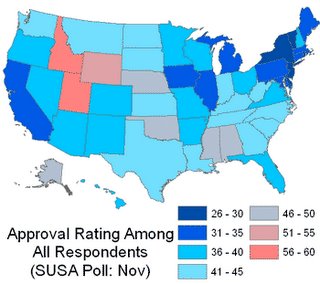 Not a good show for Chimpy-Bushitler, that is for sure!

Too bad their data is no longer accurate. The current and respected Rasmussen Report has his approval rating back to 46%.

These earlier polls do make you assume that if “W” is having such a hard time, then surely his democratic opponents are reaping the benefits. Right?

But, looking at Congressional Democratic approval ratings you get this… 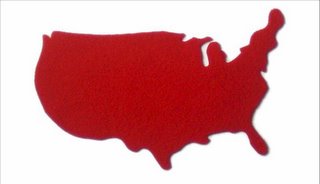 And, the Democrat “Cut and Run” talk from Representative Murtha last week and Representative Pelosi after the president’s speech on Wednesday November 30, has done a wonderful job improving the democrats image. Right?

Even among Democrats you get… 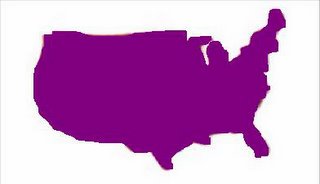 When asked “are you skeptical of Democratic complaints about the war…”

Just three of 10 adults accept that Democrats are leveling criticism because they believe this will help U.S. efforts in Iraq.

It makes you wonder who is really hurting?

Jeff Goldstein notes that it is hard to back the Democrats when they have an incoherent message, or in the case of John Kerry, when they continue to flip-flop on the crucial issues.

Update: Willaim Kristol at the Weekly Standard has more thoughts on the defeatist party:

“Pelosi’s endorsement today of the withdrawal of U.S. troops from Iraq makes the House Democrats the party of defeat, the party of surrender. Bush’s strong speech today means the GOP is likely to be–if Republican Congressmen just keep their nerve–the party of victory.”

The Anchoress has a “brilliant analogy” on the current political situation.