Sending holiday cheer via the web to our soldiers in the field. 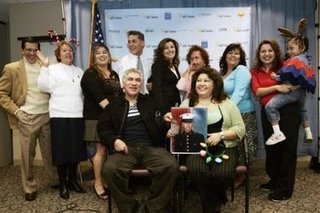 Jose Mondragon, sitting, and his wife Patricia, holding a photo of their son US Marine Cpl. Michael Mondragon, who is currently deployed in Fallujah, Iraq, are joined by their extended family, to send their holiday greetings during “Operation Best Wishes,” which gives families 10 minutes on a high-speed Webcast channel to exchange holiday video and audio greetings with loved ones in deployed overseas, Wednesday Dec. 14, 2005, at the Wescom Credit Union headquarters in Pasadena, Calif. Military personnel can view and respond live or access the greeting from the event’s Web site. The effort is a joint project developed by Western Corporate Federal Credit Union (WesCorp) and Counter Intelligence Associates (CIA), a video production company. (AP Photo/Damian Dovarganes)

Michelle Malkin and Chuck Ziegenfuss are also promoting Salute America’s Heroes. They are donating $500 to every wounded Soldier, Sailor, Airmen or Marine who registers with them in the next few days.