If you read Steven Weisman’s article today in the New York Times on former embittered Powell aide Lawrence B. Wilkerson you find there is no news with this at all except for an angry man, overlooked in the reconstruction of Iraq who recently was launched to celebrity status for blasting his former bosses.

There is no news here… unless feeling sorry for a Bush-basher is news.

There is the attack on the President’s intelligence:

Alone among those who surrounded Mr. Powell in the first term, he is speaking out critically, assailing the president as amateurish, especially compared to the first President Bush, and describing the administration as secretive, inept and courting disaster at home and abroad. Nor has he spared his former boss, whom he says was overly preoccupied with “damage control” for policies set by others…

…Mr. Wilkerson said in a well-publicized speech at the New America Foundation in October. “And you’ve got a president who is not versed in international relations and not too much interested in them either,” he added in the speech.

There is admission he was hurt when he was overlooked for a job:

It was an embittering experience for everyone at the State Department, Mr. Wilkerson says, to be saddled with presenting what turned out to be false information at the United Nations, and also to have been sidelined in the running of postwar Iraq by the Pentagon. 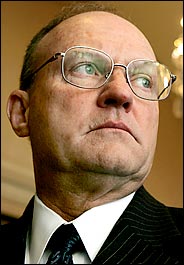 And, there is this sad tone from this article that once Wilkerson talked about Powell, his former boss, as “overly preoccupied with damage control”, that Secretary Powell is not very happy with him:

Though Mr. Powell has kept his silence about his former aide, he has let it be known through friends that he objects to the charges, especially the suggestion that he was overly loyal to President Bush. “It’s very painful for me,” Mr. Wilkerson says. “I’ve lost a friend of 16 years. I won’t say I’ve lost him, but the estrangement is palpable.” One e-mail message he says he got from Mr. Powell complained tersely, “Don’t characterize my loyalty.”