Israel did not show up at this UN Palestinian Party.
But, it wasn’t missed. 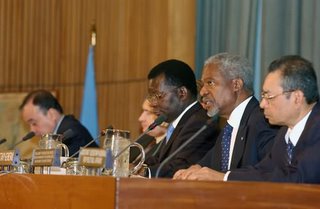 As the “map of Palestine” without the state of Israel stands in the background, Secretary-General Kofi Annan addresses the public meeting at UN Headquarters. The anniversary of the UN partition vote that survivors of the concentration camps celebrated, has been described by Secretary-General Annan as “a day of mourning and a day of grief.” Palestinians, and Arab citizens more generally, refer to it as part of “Al-Nakba,” meaning the “catastrophe” of the creation of the state of Israel. (Eye on the UN)

Eye on the UN caught Kofi and company in embarrassing photos at the “International Day of Solidarity with the People of Palestine” recently. The map displayed at the event failed to include Israel for some odd reason and it looks like no one else missed them, either.
(This was reported at Powerline and Little Green Footballs.)

Unfortunately, the President of Iran was not among them.

The new hardliner President Ahmadinejad of Iran, continued his attacks on Israel today at the OIC in Mecca:

Al-Alam said Ahmadinejad was speaking in the holy city of Mecca in Saudi Arabia where he was attending a two-day meeting of the Organisation of the Islamic Conference that opened Wednesday.

“Is it not true that European countries insist that they committed a Jewish genocide? They say that Hitler burned millions of Jews in furnaces … and exiled them,” Ahmadinejad told Al-Alam.

“Then because the Jews have been oppressed during the Second World War, therefore they (the Europeans) have to support the occupying regime of Qods (Jerusalem). We do not accept this,” he said.

He also noted that European countries “believe in this so much and are so determined that any researcher who denies it (the Holocaust) with historical evidence is dealt with in a most harsh way and sent to prison.”

Well, at least he did not stick with his “blow them off the map” rhetoric from last month.