NDTV VIDEO FROM DONGZHOU VILLAGE THE SCENE OF THE GOVERNMENT MASSACRE,
HERE

Police killed dozens of protesters in the Chinese Village last week; checkpoints are set up on the perimeter of the town. 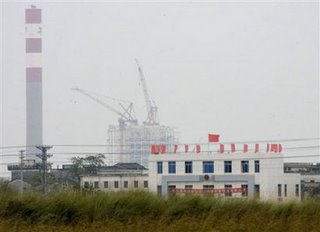 A government office with a banner warning against breaking the law is seen near the power plant under construction at left that is believed to be at the heart of a dispute at Dongzhou village near Shanwei, Guangdong, southern China, Wednesday, Dec. 14, 2005. Authorities are maintaining a check on people entering the village of Dongzhou where demonstrators were fatally shot last week. (AP Photo/Ng Han Guan)

Chinese authorities are trying to keep information from leaking into the media from Dongzhou Village on coastal China:

Now, a stilted calm prevails, a cover-up so carefully planned that the small town looks like a relic from the Cultural Revolution, as if the government had decided to re-educate the entire population. Banners hang everywhere, with slogans in big red characters proclaiming things like, “Stability is paramount” and “Don’t trust instigators.”

Many facts remain unclear about the police crackdown on a Dongzhou demonstration on Dec. 6, which residents say ended in the deaths of 20 or more people, but one thing is certain: The government is doing everything possible to prevent witnesses’ accounts of what happened from emerging.

Residents of Dongzhou, a small town now cordoned off by heavy police roadblocks and patrols, said in scores of interviews on the telephone and with visitors that they had endured beatings, bribes and threats at the hands of security forces in the week and a half after their protest against the construction of a power plant was violently put down.

Timur-I-Leng is reporting today that the residents of the village are writing internet messages in code for fear that the government will delete them. 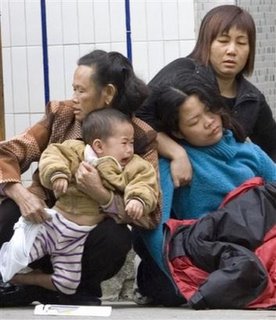 Family members of a man neighbors said was killed by authorities grieve on the streets of Dongzhou village near Shanwei, Guangdong province, Monday, Dec 12, 2005. Police officers have sealed off the southern Chinese village after fatally shooting demonstrators and are searching for the protest organizers. (AP Photo/Ng Han Guan)

Chinese Authorities are pumping propaganda into the town as they continue to make arrests and harass the villagers:

Authorities continue to arrest villagers. According to the villagers, the sound truck in the village has now added new contents in its propaganda: naming off a list of villagers and asking them to surrender.

Moreover, the monitoring of villagers has become more intense. A villager had called his neighbor and said he had found a bucket. The phone call may have been wire tapped by officials, who then suspected it was some sort of evidence and sent police to search these two houses, while not allowing people inside to leave. The search lasted for more than three hours, but in the end, it turned out to be only a bucket.

Sound of Hope Radio Network has a 9 part series of Commentaries on the Chinese Communist Party. 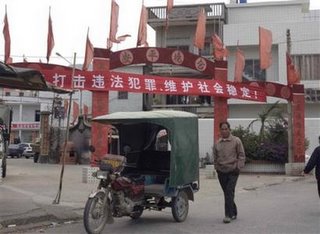 A Chinese resident walks past a banner which reads ‘Strike at law breakers, Maintain social stability’ at the Dongzhou village near Shanwei, Guangdong, Monday, Dec. 12, 2005. Police officers have sealed off the southern Chinese village after fatally shooting demonstrators and are searching for the protest organizers. (AP Photo /Ng Han Guan)

The Peking Duck is numb with the news today.