Stephen Hayes at the Weekly Standard has been researching the contacts between Saddam’s Iraq and Al Qaeda for several years. Today in an interview on the Hannity Show Hayes said that there are over 2 million intelligence documents from Saddam’s Iraq that have been or need to be studied by US investigators in Qatar, Iraq and Washington DC. Stephen requested access to the documents but has had no luck gaining access to any of the information, yet. Hayes says that topics such as “Palestinian Training in Iraq” and a “Secret Meeting in late 2002 between the Taliban and Iraq” is part of the information. “Move America Forward” recently released a TV ad with documents that they say show Iraq-Al Qaeda links and Iraq’s WMD.

Move America Forward is expanding their ad campaign to television. 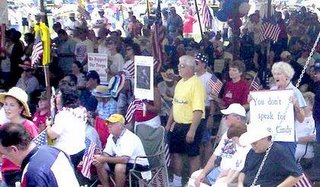 Thousands of “Move America Forward” supporters gathered in Crawford, Texas in June to show support for the US troops in the field. The organization has released television ads that support the Bush Administration’s accusations of Iraqi weapons of mass destruction.

The Wall Street Journal is reporting today that the Pro-American group based in California, “Move America Forward” is backtracking and firing away with “new data” to support Bush’s original reasons for invading Iraq.

The television commercials are attention-grabbing: Newly found Iraqi documents show that Saddam Hussein possessed weapons of mass destruction, including anthrax and mustard gas, and had “extensive ties” to al Qaeda. The discoveries are being covered up by those “willing to undermine support for the war on terrorism to selfishly advance their shameless political ambitions.”

The hard-hitting spots are part of a recent public-relations barrage aimed at reversing a decline in public support for President Bush’s handling of Iraq. But these advertisements aren’t paid for by the Republican National Committee or other established White House allies. Instead, they are sponsored by Move America Forward, a media-savvy outside advocacy group that has become one of the loudest — and most controversial — voices in the Iraq debate.

While even Mr. Bush now publicly acknowledges the mistakes his administration made in judging the threat posed by Mr. Hussein, the organization is taking to the airwaves to insist that the White House was right all along.

“When you have people participating in partisan activities with nonprofit dollars, that’s really something the IRS needs to look at,” says Tom Matzzie, the Washington director of the liberal advocacy group MoveOn.org.

The minute long ads are eye catching and hard hitting and include these accusations:

The documents talked about in the advertisement are said to be posted on the “Move America Forward” website. Here is the background on the documents:

Ms. Morgan says she is baffled that the White House no longer makes the case that Mr. Hussein had WMDs. The White House dropped the claims after a variety of investigators found no evidence to substantiate them. But Ms. Morgan says her ads are justified, based on documents given to her in Iraq by an Iraqi general she identified as Abdul Qader Jassim, and on information from U.S. officials involved in the hunt for weapons there. She believes Mr. Hussein possessed WMDs, and that those weapons remain in Iraq today. It couldn’t be ascertained that Mr. Jassim is a general and he couldn’t be reached for comment.

It’s no wonder that the MoveOn.org and other liberal groups are going after “Move America Forward.”

Many conservative bloggers have been asking for the White House to release documents found in Iraq for quite some time now. Maybe this is a start.

Powerline has more on the WSJ article and a response from a soldier who met members of the “Voices of Soldiers Tour” in Iraq sponsored by “Move America Forward.”