It’s not uncommon in the Middle East to see Israelis characterized as animals as Little Green Footballs pointed out last week with a new children’s clamation film where Jews are turned into monkeys and pigs.

But, heaven forbid if the shoe is on the other foot!

Palestinians don’t like it so much if Arafat is the one made the monkey. 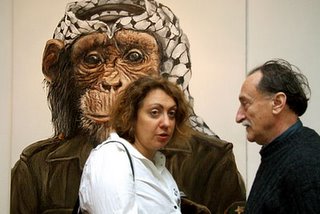 The Russian gallery explained that the artwork is named after the monkey and not Yasser Arafat.

The embassy of the Palestinian Territories’ in Moscow has complained about a controversial Russian arts gallery that has exhibited a portrait of a monkey dressed as the late Palestinian leader Yasser Arafat:

In a letter sent to the gallery owner Marat Guelman the Palestinian diplomats voiced regret over the unethical attitude of the artist, whose name was reported as Ilya Chichkan, towards the late president of the Palestinian National Autonomy and Nobel Prize winner.

The gallery owner responded by saying that politicians should not tell artists what to do, especially if they are artists living in another country. He said that the painting was not titled Arafat but called by the name of the monkey that was used as the model for the artist.

Asked if Ilya Chichkan was Jewish, Guelman said the artist was Ukrainian.