This is startling news! It is a shame the media is not reporting it!

Iraq has seen a very dramatic decrease in the number of civilian casualties this past year!
(click on picture to enlarge)

In fact if you take out that horrible day in August when nearly one thousand panicked Iraqis were trampled or drowned near a Muslim shrine, the year shows striking progress compared to 2003 and 2004.

This graph shows the daily fatalities in Iraq. Each spike is a day that saw a large number of Iraqi deaths. The days that saw massive death have decreased significantly this year.

You may be reminded of the words of the democratic hawk back on November 17th:

The war in Iraq is not going as advertised. It is a flawed policy wrapped in illusion. The United States and coalition troops have done all they can in Iraq, but it is time for a change in direction… Our military has been fighting a war in Iraq for over two and a half years. Our military has accomplished its mission and done its duty… Our military captured Saddam Hussein, and captured or killed his closest associates. But the war continues to intensify.

Thankfully, he is wrong on that point as well.

The following is a Haider Ajina translation of a headline and news published by Shams-Alhorreya on Thursday, December 29th, 2005.

In an interview the commander of operations in the Iraqi defense ministry Brigadier General Abdul Azizi Mohamed Jasem said; Recent armed terror incidences in Iraq have declined quite noticeably, especially before and after the parliamentary elections on December 15th.

Brigadier Jasem added; Iraqi military forces have increased its units (or formations) and is now capable of carrying out its duties (in its area of responsibility) on its own initiative and with no assistance from the multi national forces. This improvement in the Iraqi military came about due to an increase in the number of volunteers joining the military. As well as huge losses dealt the terrorists from military and police operations and a decrease of support from outside Iraq to terrorists, has substantially weakened these terrorists. There are a number of security plans being implemented by the Iraqi military in Baghdad to wipe out the armed terrorists committing criminal acts. We have further supplied these units with the latest weaponry and equipment as well as armored personnel carriers and hummers to combat armed activities. These were bought by contract from the U.S.A.

These are encouraging times for Iraqis and their battle for democratic rule & freedom from tyranny. Sunnis have joined the political process, terrorist activities are on the decline, Iraqi military is feeling confident (thanks to our training and supplies) volunteers are joining the only all volunteers army in the Arab world and middle east, rule of law is prevailing, infra structure is being built, jobs are being created, health care and education is being improved, industry is being developed, security is improving, wages are climbing, real estate prices are increasing, commerce is booming and the list goes on and on and on. All this is possible because we have our men and women on the ground in Iraq working hard with Iraqis making sacrifices and strongly dedicated to their mission. Let us not forget Iraqis are willing learners, hungry for what we offer them and are taking ownership of their country and lives. Iraqis are enduring hardships so their children can have a free safe society to live in and contribute to.

The data for the graphs was taken from the anti-war Iraq Body Count website. The tally includes all of the civilian deaths in Iraq since January 2003, two months before the War in Iraq began.

The totals include civilian deaths resulting from the breakdown in law and order, and deaths due to inadequate health care or sanitation. The site also adds in terrorists who died and other unexplainable violent deaths. It still is the best site out there tallying deaths in Iraq even though much of their data is questionable.

The Scrutinator has good analysis on Iraqi Body Count.

This table shows the Top 20 Deadliest Days in Iraq 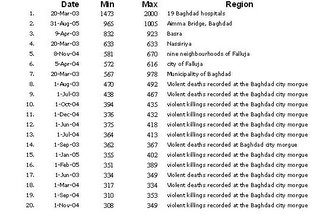 As you can see (click on the table to enlarge) several of the top numbers are figures taken from morgues and therefore it is unclear if these deaths are counted elsewhere.

During Saddam Hussein’s 20 year regime of genocide, ethnic cleansing, war crimes and torture about 5% of the people of Iraq were killed or mysteriously disappeared never to be seen again after being arrested!

Iraq, a country approximately the size of California, but with only 2/3rd its population, suffered more than a million violent deaths under Saddam Hussein’s regime. That would average out at about 50,000 deaths a year in a population of 25 million before the Americans got involved, or 4166 deaths each month!

A Big Hat Tip to Brother Joe the accountant who helped to sort the data.
And also a Hat Tip to Dave from NYC for the help.