THE MASSIVE TURNOUT IS SEEN AS AN EMBARASSMENT TO HONG KONG LEADERS,
VIDEO HERE

Thousands take to the streets in Hong Kong to protest for democracy. 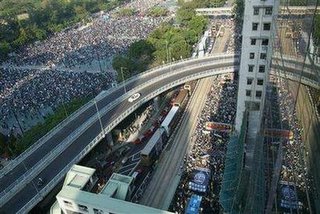 Protesters march as others gather at Victoria Park to demand universal suffrage in Hong Kong December 4, 2005. Tens of thousands marched in Hong Kong on Sunday for the right to directly elect their political leaders and to protest against a package of electoral reforms pushed by the city’s chief executive and Beijing. (REUTERS/Stringer) 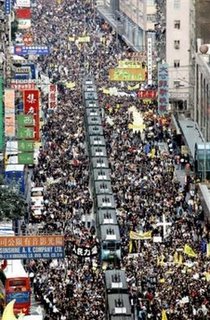 Tens of thousands of people march on a Hong Kong downtown street to pressure the government to speed up political reforms that would allow voters to pick the city’s leader and entire legislature. Sunday, Dec. 4, 2005.(AP Photo/Vincent Yu)

Larger than expected turnouts were reported at the protest march for democracy in Hong Kong today:

Tens of thousands of people have joined a demonstration in Hong Kong calling for a fully-democratic political system in the Chinese autonomous territory.
Trade unions, activists and civic groups marched with ordinary citizens, some carrying banners denouncing China.

China has refused to allow people in Hong Kong to vote to elect their next leader in two years time.

Pro-democracy campaigners say if that remains the case, they should be given a timetable and told when they will be allowed to vote for who rules them.

One lawmaker, Lee Cheuk Yan, said people “are very much disappointed” over the long wait.

But the chairman of Hong Kong’s General Chamber of Commerce, David Eldon, said pushing for a timetable was not that important. 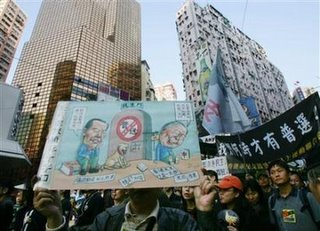 Protesters, demanding universal suffrage, carry a cartoon mocking Chinese officials as they march past the Causeway Bay shopping district in Hong Kong December 4, 2005. Tens of thousands marched in the territory on Sunday for the right to directly elect their political leaders and to protest against a package of electoral reforms pushed by the city’s chief executive and Beijing. (Bobby Yip/Reuters)

Sunday’s protest evoked memories of July 2003, when an economic slump and disaffection with the then chief executive, Tung Chee-hwa, drew half a million people on to the streets of the former British colony — one in fourteen residents.

“Donald Tsang is a good leader, but he’s only elected by 800 people, which means he only has to please them,” said Andrew Wong, 40, who works for an export business. “I’ve brought my five-year-old daughter here to teach her what democracy is.”

Walking among banners that read “You want a clown or a chief executive?” and “Oppose bird-cage political reform,” Paul Tsang, 83, said Hong Kong lacked direction without a plan for democracy.

“Early in the morning, you wake up with a schedule, to eat breakfast and do things during the day,” the retired army officer said. “It’s ridiculous to do something without a schedule.”

Anson Chan, who was Tung’s powerful head of the civil service for four years after he took over from British governor Chris Patten in 1997, joined a pro-democracy march for the first time.

“I just feel there are moments in one’s life when you have to stand up and be counted,” she told reporters. 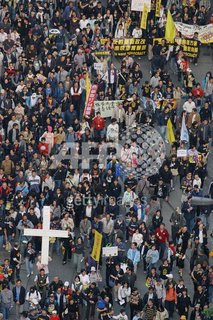 Tens of thousands of people take part in a pro-democracy march in the streets of Hong Kong, 04 December 2005, to demand the full democracy that was promised when Britain handed its crown-jewel colony back to China eight years ago. Frustrated with the limited reforms proposed by the city’s Beijing-appointed leader, Chief Executive Donald Tsang, marchers thronged the streets in the biggest show of public anger since he took office in June, 2005. (AFP PHOTO/SAMANTHA SIN/ Getty Images)

Hong Kong officials met with Beijing officials on Friday to discuss the strategy for democratic changes.

Robert Mayer at Publius Pundit has more on the demonstration today.

Daai Tou Laum was at the march today and has terrific pictures and analysis.

Philippine Commentary has more on developments new and old in China.

And, a friend weighs in from Egypt on hopes for democracy:

For me, a Middle Eastern citizen, I have no dream but a successful democracy and freedom experience to emerge from the darkness of dictatorships and regimes sponsoring terrorism and extremism.

It appears to be universal.