My thinking is that it was more of a “drunken” rather than “racial” riot. 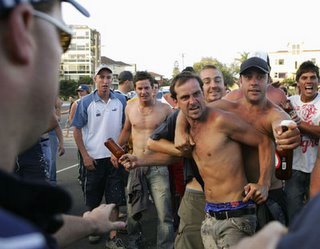 Anger spills over … a crowd shows their anger towards police officers during unrest at Cronulla beach yesterday. (Australian Broadcasting Company)

Police seize weapons as a crowd congregated at a beach bar earlier today:

Police have confiscated iron bars from a group of people who have gathered in a park near Maroubra Beach in Sydney’s east.

Police say a total of 16 people have been arrested on 41 charges arising from yesterday’s violence in the Sydney beach-side suburb of Cronulla.

Dozens of additional police have been called to Maroubra to patrol the area.

They have confiscated about 30 iron bars from a group, which then congregated outside a pub and shops opposite the surf life saving club.

The group had been growing in number throughout the afternoon. 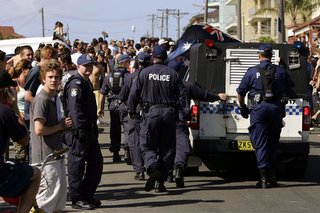 Thirty-one people were injured and 16 were arrested in hours of violence.

The rampage on Monday broke out in Cronulla, the same coastal suburb where the violence began, and in neighboring Carringbah, said Paul Bugden, spokesman for New South Wales police. Calm was restored by early Tuesday.

Bugden said six people were arrested and one person apparently was hit by a rock in Monday’s violence.