“The people of Hong Kong have no other option but to show solidarity by joining together by taking part in peaceful assembly to voice our aspirations, to let the Beijing leaders know we really want and deserve democracy.” 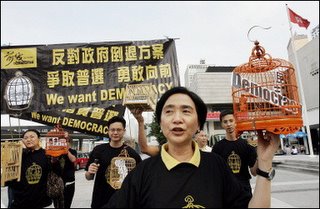 Pro-democracy opposition lawmakers in Hong Kong, including Emily Lau (front R), have agreed to meet a Chinese official in a landmark meeting viewed as an olive-branch effort by Beijing to cool a row over political reform here(AFP/File/Ted Aljibe)

HONG KONG’S pro-democracy lawmakers today accepted an invitation by Beijing to attend a meeting with senior Chinese officials ahead of a major democracy protest.

About eight of the 19 opposition lawmakers invited agreed to cross the border on Friday to meet with top Chinese officials.

A massive pro-democracy rally is planned for Sunday. Up to 100,000 people are expected at the march. 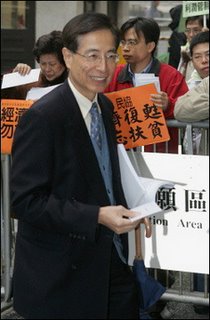 US Secretary of State Condoleezza Rice stressed during talks at her office with Hong Kong’s veteran democrat Martin Lee, pictured, that the political fate of Hong Kong should be decided by its people, as Beijing faced demands for greater freedom from democracy advocates in the former British colony(AFP/File/Mike Clarke)

Hong Kong Pro-Democracy leader in China says people have no other option than to use “people power” in a bid to pressure Beijing for greater freedom.

Ahead of a mass democracy rally in Hong Kong on Sunday, Martin Lee blamed the Chinese-administered territory’s chief executive Donald Tsang “for not reflecting the strong aspirations of the people of Hong Kong to Beijing.”

Lee said Beijing was “not going to be too successful” in dampening the street protests despite offering an invitation to a group of pro-democracy opposition lawmakers to meet a Chinese official on the eve of the rally.

When Britain handed sovereignty of Hong Kong back to China in 1997, the post-colonial constitution, or Basic Law, provided for the eventual full democratic election of the territory’s leaders.

US Secretary of State Condoleezza Rice, during talks with Lee on Tuesday, emphasized “our conviction that the people of Hong Kong should determine the pace and scope of political reform in accordance with the Basic Law.”

China is not happy about the U.S. support for full democracy in Hong Kong.