The Beijing backed Hong Kong government suffered a defeat to democracy legislators today who voted down their reform package. 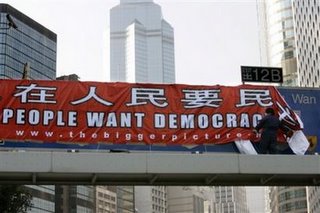 Matt Pearce, pro-democracy protester from a local political group, hangs a big banner reads ‘The people want democracy now’ to a road sign in Central, Hong Kong business district Wednesday, Dec. 21, 2005. Legislators began a final debate Wednesday on a political reform package that pro-democracy lawmakers have vowed to reject because it provides no timetable for when Hong Kong will become fully democratic. The government has warned that Hong Kong’s gradual move toward greater democracy would be derailed if legislators reject the reforms. The package proposes adding seats in the legislature and expanding a committee of elites who pick the city’s leader. (AP Photo/Kin Cheung)

The Hong Kong Legislature voted down a government backed roadmap to reform today in Hong Kong saying the measure did not go far enough:

The legislators mustered enough votes to defeat a proposal that would have doubled the size of the committee that selects Hong Kong’s chief executive.

They later voted down a proposal to enlarge the size of the legislature from 60 to 70.

The Hong Kong government, acting on orders of the central government in Beijing, had promoted the reforms as a step towards democracy for the former British colony.

But pro-democracy lawmakers argued that the changes were mere windowdressing. They, along with much of the Hong Kong public, want the chief executive and the full legislature to be elected directly by the people, and the lawmakers have been demanding a timetable for direct elections.

Protesters set up tents in front of Congress last night in an all night vigil for democracy. 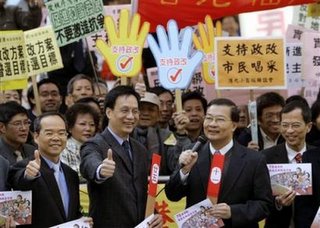 Pro-government lawmaker Ma Lik, second left, chairman of the pro-government Democratic Alliance for the Betterment and Progress of Hong Kong, and other party members thumb up outside the Hong Kong’s Legislative Council in Hong Kong as they supporting government’s political reform, Wednesday, Dec. 21, 2005. Ma Lik argued that Hong Kong wasn’t ready for full democracy and that the public still needed to reach a consensus on the best way and time to achieve universal suffrage. ‘We have to admit that the majority of the public supports democracy,’ said Ma, ‘But democracy can’t be monopolized by anybody.’ (AP Photo/Kin Cheung)

The Central Communist Government in Beijing warned that defeating the reforms may derail progress towards democracy:

The measure needed 40 votes — or two-thirds of the legislature — to pass, but got just 34 votes. Pro-democracy lawmakers hold 25 seats.

The government has warned that rejecting the reforms would derail gradual progress toward greater democracy and sour relations with the territory’s rulers in Beijing. The former British colony returned to Chinese rule in 1997.

Pro-democracy lawmakers complained that the proposal doesn’t go far enough. It includes two main proposals: expanding the 60-member legislature by 10 seats and doubling the size of an 800-member committee that elects the city’s leader.

The pro-democracy legislators also want the government to set a date for universal suffrage — the right for voters to directly elect their leader and entire legislature.

A massive democracy protest was held on December 4th in Hong Kong.