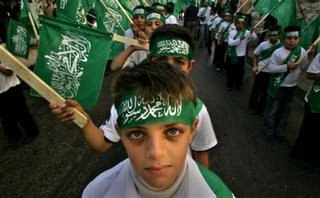 Palestinian youths march holding Islamic flags during a rally organized by the Islamic group Hamas calling for reform in the Palestinian Authority and an end to the arrest by the Palestinian government of Islamic militants in the West Bank town of Ramallah Friday Dec. 9, 2005. (AP Photo/Muhammed Muheisen)

An Israeli official has accused the UN of allowing Hamas Rallies at its offices and school:

The U.N., through UNRWA (U.N. Relief and Works Agency for Palestinian Refugees), is supposed to serve humanitarian needs for Arabs in the Gaza area, but “there have been instances of Hamas rallies on the school grounds of UNRWA schools,” said Arlene Kushner, who works with Bedein.

Speaking at a conference of United Nations correspondents, Bedein said his investigations raised questions about a “moral code” at UNRWA.

Kushner reported that a school organized by the relief agency held a service commemorating the death of an Islamic Jihad terrorist killed by the IDF. She added that UNRWA intentionally keeps tension high in villages where it operates.

On Friday, Hamas announced that it will not renew its truce with Israel in January.