And, this picture pretty much sums up the week! 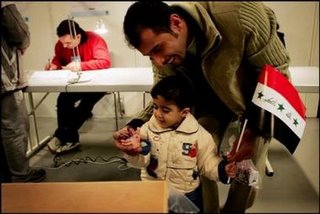 Two-year old Mohammed wanted to have his fingers stained with ink just like his father, so the two went back to the electoral table at the central polling station in Copenhagen, Tuesday, December 13, 2005, to get the little proof of democracy. (Photo by AP)

“The US liberated Iraq and heralded freedom and democracy in the entire Middle East. Before March 2003, there were no popular movements in Egypt like “Kefaya”, Doctors for change”, “Writers for change”, “Journalists for Change” and “Children for Change”…etc. I had never heard of one single demonstration in any street before Iraq. In Lebanon, Syria was manipulating the Lebanese and taking all their income. Now, the Lebanese people are determined to win their freedom and independency. In Saudi Arabia, who could have ever believed that women would go to vote as in Jeddah? In all Gulf countries, at least now there is a female minister or member of parliament at countries where women’s place was their home regardless of their education.”

Beautiful! I could not have said it any better.

On a side note,… a day after history was made in Iraq, I was wondering what President Bush was going to do about the negative press from yesterday. Powerline says that President Bush came out swinging today in his speech. After reading the speech, I’d say they are correct!