General Tommie Franks was awarded the Defender of Freedom Award tonight from the Freedom Alliance. 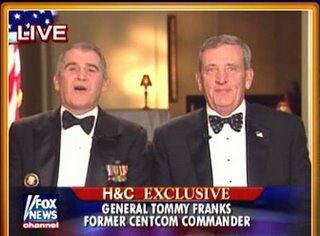 General Franks: Absolutely. If you had that side of the argument being presented quite as much and quite as forcefully as the mainstream media in this country as I see it day by day, that doesn’t surprise me a bit, Allen.

Colmes: Is that the media’s fault?

Franks: Well the fact that we are looking at this sort of poll number that you described, yeah, I attribute that to the media, sure, yeah.

Sean Hannity: I want to go to John Murtha’s comments today if I may, “Most troops will leave within a year. Our army is broken, worn out, living hand to mouth.” He advocated in just the last two weeks in what I believe is a cut and run policy. What do you think of those statements?

Hannity: But, you know it’s not broken. You know its not living hand to mouth.

Hannity: How destructive is that to troop morale?

Franks: The fact is that I doubt it. I think the young men and women serving in Afghanistan and Iraq know why they are there. So, does it make me happy to see the sort of representations we see in a lot of mainstream media? No it doesn’t but does it hurt morale at this point? No it doesn’t.