The Bush Administration agreed today to ban torture and is looking at other means to extract critical information from Islamic jihadists.

After U.S. officials reviewed the U.N. Convention on Torture, to which the U.S. is a signatory:

Any act by which severe pain or suffering, whether physical or mental, is intentionally inflicted on a person for such purposes as obtaining from him or a third person information or a confession … when such pain or suffering is inflicted at the instigation of or with the consent or acquiescence of a public official or other person acting in an official capacity.

And, the dictionary definition of torture:

1. a) Infliction of severe physical pain as a means of punishment or coercion.
b) An instrument or a method for inflicting such pain.
2. Excruciating physical or mental pain; agony: the torture of waiting in suspense.
3. Something causing severe pain or anguish.

(As posted at Andrew Sullivan via Glenn Reynolds.)

And, weighed that information against the current university regulations on hazing:

The legal definition of hazing as an act “that endangers the mental or physical health or safety of a student for the purposes of pledging, being initiated into, affiliating with, holding office in, or maintaining membership in an organization.” The actual presence of danger is a necessary condition for hazing to occur. 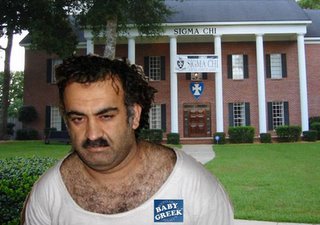 The U.S. is considering initiating future detainees of the War on Terror into a fraternal organization.

Thus, instead of humiliation and low self esteem created by waterboarding and the occasional non-sanctioned naked pyramid, future terror detainees will gain confidence and create community, friendship, and trust with their fellow jihadists and guards.

Another suggestion is terrorist boot camp.

Mad Minerva also thinks something should be done about grad school torture. HA!