They wanted to vote.

Who was the fool that said that people in the Middle East don’t want democracy? 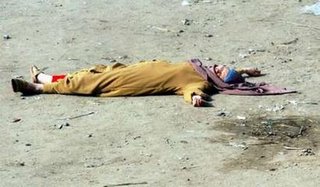 An Egyptian woman lies unconscious after the use of tear gas by Egyptian riot police in the Delta town of Kafr el-Sheikh to prevent voters from casting their vote December 7, 2005. Police fired teargas and rubber bullets to stop many Egyptians voting in the last round of Egypt’s parliamentary elections on Wednesday, repeating what Islamists say are tactics to limit their gains. (REUTERS/Stringer)

Egyptian Sandmonkey has much more on the day of voting in Egypt:

Today is the final day in the egyptian parliamentary elections, and it seems like the government decided to leave the best for last in terms of violence: They are opening fire on the egyptian voters. Actual Bullets. So far 2 have died and at least 50 have been injured, and the day isn’t even close to over yet.

Wait, the number has just been brought up to 130 wounded…

…Government supporters armed with knives, bottles and machetes attacked voters lined up trying to get into several stations, sparking clashes with supporters of the Muslim Brotherhood, the government’s main rival.

During the last round of voting after being blocked out front by the police, voters scaled the back walls of the polling stations to get in to vote. 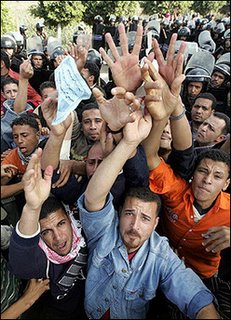 Egyptian men rally next to a police line stopping voters from approaching a voting station in the Nile Delta village of Kalin, north of Cairo. Six voters died as Egypt’s month-long parliamentary elections wound up amid running battles and electoral abuses that have drawn a sharp rebuke from the regime’s ally the US.(AFP/Cris Bouroncle)

At another Zagazig station, a battle raged between Brotherhood members and government supporters wielding knives who attacked voters trying to push their way past a police blockade. Police fired tear gas from time to time but did not arrest the government supporters. One would-be voter was bleeding from the head.

The voters were also beat down in previous rounds of voting. 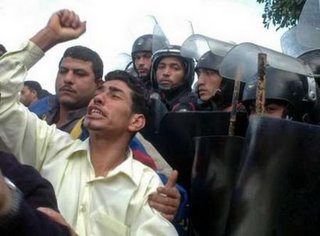 An Egyptian protester shouts anti government slogans as riot police deny voters entry to a polling station in Kafr al-Sheikh December 7, 2005. Police fired teargas and rubber bullets to stop many Egyptians voting in the last round of Egypt’s parliamentary elections on Wednesday, repeating what Islamists say are tactics to limit their gains. President Hosni Mubarak’s ruling party has maintained a big lead in voting that began on Nov. 9, but the Muslim Brotherhood has surprised the country by winning 76 out of the assembly’s 454 seats, five times its previous tally. (REUTERS/Victoria Hazou)

Freedom for Egyptians had thoughts on the political situation in Egypt yesterday.

Egyptian Sandmonkey, Big Pharoah, and Freedom for Egyptians are great sources for the latest from the “voter’s battle zone”.

Answer to Question above on who said that democracy may not fit in the Middle East: “Riyadh and Cairo (Mubarak and Prince Abdullah), though on different wavelengths in terms of political reform, have also said in unison that the Western model of democracy does not necessarily fit a region largely driven by Islamic teachings.”

Update: (11:00 PM CST) The US sharply criticized the violence today at the Egyptian polls.

The death toll now stands at 8.