Don King also plans to bring live boxing to Iraq for the troops. 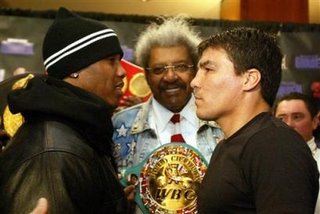 Zab “Super” Judah wants to be one of the fighters on Don King’s Iraqi tour.

On Wednesday, December 14 2005 Don King was interviewed on CNN by Wolf Blitzer. (via Drudge) Here is part of the transcript:

WOLF BLITZER: Don king is known worldwide as a big-time boxing promoter. But has also taken some new fights on recently… You love George Bush?

DON KING: I love George Walker Bush because I think he’s a revolutionary. He’s a president that comes in with conclusiveness. What they’re doing in tomorrow in Iraq is a demonstration of that for the vote for democracy. The fundamental process of democracy is freedom of speech, law and order, being able to have freedom, working with people and working and governing yourselves. George Bush is that. He included in…

DON KING: No, I don’t. In fact, I want to support him more now because it seems like everybody is punching him. You know what I mean? But he’s fighting back, and he’s throwing great combinations. And I think he’s the guy that is really a revolutionary president.

I think he’s a president that cares about the people he represents, but doesn’t compromise himself to the extent that he acquiesce and accommodate. He goes out there and says like it is, and tries to make things better. Inclusiveness, education, is fighting for that.

These are the things that many guys that don’t fight for — George Walker Bush is a tremendous advocate to America, a great president for the great American people, and he’s decisive. He’s doesn’t equivocate.

Don King suggests he is the “Black Bob Hope”…

Don King also plans to bring a boxing match to Iraq to put on for the troops that are there.

I’m going to Iraq to put on a boxing show to lift the morale of the troops, the 101st Airborne, Air Assault, strike fear, the mightiest division on the planet is there. And I’m going over there with General David S. Petraeus, who is now handling the reconstruction there.

But all of the 101st Airborne, who’s been in every war from World War I to Vietnam, to Desert Storm to Iraqi Freedom now, I want to be there to support them and bring some of my champions there to do a good show for them and lifting their morale.