Despite threat of Mortal Sin, Catholics flocked to St. Stanislaus for a “valid” but “illicit” Christmas Service. 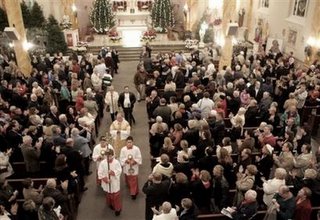 The Rev. Marek Bozek left his previous parish without his bishop’s permission and was hired by St. Stanislaus Kostka Church earlier this month. As a result, Bozek and the six-member lay board were excommunicated last week by Archbishop Raymond Burke for committing an act of schism.

Burke said it would be a mortal sin for anyone to participate in a Mass celebrated by a priest who was excommunicated — the Catholic Church’s most severe penalty. Burke, who couldn’t stop the Mass, said it would be “valid” but “illicit.”

Despite the warning, Catholics and non-Catholics from as far as Oregon and Washington, D.C., filled the church. An overflow crowd viewed the Mass by closed circuit TV in an adjoining parish center.

“I’m not worried about mortal sin,” said worshipper Matt Morrison, 50. “I’ll take a stand for what I believe is right.”

Many wore large red buttons reading “Save St. Stanislaus,” and said they wanted to offer solidarity to a parish they believe has been wronged.

When Bozek entered from the rear of the church, the congregation rose and greeted him with thunderous applause.

“It was magic,” said JoAnne La Sala of St. Louis, a self-described lapsed Catholic. “You could feel the spirit of the people.”

The penalty was the latest wrinkle in a long dispute over control of the parish’s $9.5 million in assets.

The conflict with Bishop Burke started last year when he took over the diocese after Archbishop Rigali, a popular figure in the St. Louis Catholic community, was moved to Philadelphia. Many parishoners believe the Polish Pope is helping them now:

The dispute between Burke and St. Stanislaus stems from a late 19th century arrangement that gave the parish board control of the church property. Since he arrived in St. Louis in January last year, Burke has demanded that the church conform to the same legal structure as other parishes, where the bishop oversees finances.

Several of Burke’s predecessors, including Archbishop Justin Rigali – now the cardinal of Philadelphia – had attempted and failed to bring St. Stanislaus back in line with the rest of St. Louis’ Catholic churches. Burke has said that by altering their bylaws, the board members of St. Stanislaus illegally removed him and the parish priests from the board.

Early this month, the church’s six lay board members – John Baras, William Bialczak, Edward Florek, Stanley Novak, Joseph Rudawski and Robert Zabielski – hired Bozek to be their new parish pastor. Bozek had been suspended by Bishop John J. Leibrecht the previous day after telling his superior of his intention to move to St. Louis and minister to the Polish church.

Burke said hiring a suspended priest was a schismatic act and therefore the board members had excommunicated themselves.

Bozek knelt before the crib of Christ and prayed for his new parish. He prayed that for this one night, all the conflict that had brought him to this place would be temporarily forgotten.

“All I want to do is be a pastor in this beautiful church . . . and to imitate Jesus,” he said a few minutes later in his homily.

Bozek has faced controversy before back in Poland and spoke about it openly in his Sunday morning homily:

Bozek told his new parishioners the story of his struggle five years ago at a seminary in Poland with an accusation made against him – “a witch hunt” he called it. “Some people accused me of being a promiscuous homosexual,” he said. He told the rector of the seminary to provide proof, and said the rector couldn’t, but persisted in the accusations.

Bozek said he went to his Warmia Archbishop Edmund Michal Piszcz, and told him to call off the rector. He threatened to sue the archdiocese. “They have no proof,” he told Piszcz. Bozek said Piszcz agreed. Nevertheless the priest left the seminary and Poland, landing in Springfield, Mo.

“What would have happened had I not been accused?” he asked the congregation. “I probably would still be in Poland living happily near my parents. I probably never would have heard of St. Stanislaus Kostka church.”

Jan Guzowski, the rector at the Hosianum seminary in Olsztyn when Bozek was there, said in a telephone interview from Poland that Bozek had been told to leave because of suspected homosexuality.

Bozek denied Guzowski’s charges. “Of course the rector is going to say I was kicked out; that’s his side of the story,” Bozek said. “But I have a recommendation from Archbishop Piszcz which says I left by my own request.”

Last year Bishop Burke made national headlines when he said that he would not serve Communion to Senator John Kerry because of his views in support of abortion.