A joyous occasion, the picture on the left was taken during a massive Lebanese march for freedom from Syria in March… 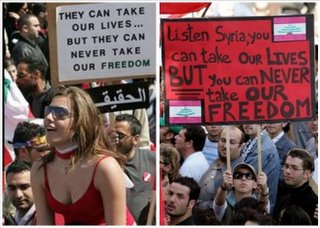 …And, this weeks sadness, the picture on the right was taken this week at the funeral of slain Lebanese journalist and legislator Gibran Tueni via Free Thoughts and Egyptian Sandmonkey.

On Saturday the chief investigator of the Hariri murder in Lebanon that sparked the Revolution to Free Lebanon accused Syria of being behind the murder:

Detlev Mehlis, outgoing head of the UN probe into the assassination of former Lebanese premier Rafik Hariri, said he was certain that Syria was behind the incident, according to an interview publishedyesterday by the newspaper Asharq Al-Awsat.

Asked by the Pan-Arab daily, “Do you believe unequivocally that Syria was behind Hariri’s assassination?” Mehlis responded, “Yes”. The paper followed up with the question, “Do you mean by that the Syrian government?” to which Mehlis replied, “That is to say, the Syrian authorities.”

MEHLIS:From the way they were carried out, it is quite obvious that there is a link of a sort. Of course, please understand that I cannot be too precise.

FAKHRY (interviewer): But are there links between them and Hariri’s assassination?

MEHLIS: Between them, yes. Between them and Hariri’s [killing], I am not in a position to say so.

FAKHRY: I understand you have put together a hit list of targeted Lebanese politicians and journalists. How did you get this list?

MEHLIS: Well, I read reports in the papers a couple of months ago that there was a death list. I have never seen one. Witnesses mention it, but we were never able really to say [that] this is accurate information.

FAKHRY: But you told Gebran Tueni that his life was under threat. How did you get to that?

MEHLIS: We had witnesses coming up to us and repeating as witnesses this newspaper information. Therefore, out of accuracy, of course, we had to inform the Lebanese authorities of that

Lebanese Muslims and Christians united to mourn the death of Tueni with a massive funeral procession this week. 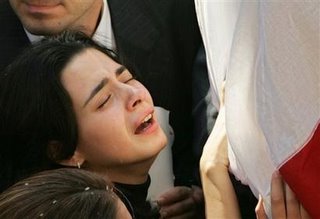 Nayla Tueni, daughter of slain anti-Syrian journalist and legislator Gibran Tueni, mourns as she lays her hand on her father’s coffin, in the Beirut district of Ashrafieh, Lebanon, Wednesday, Dec. 14, 2005. Thousands of flag-waving Lebanese, Christians and Muslims, bid farewell to their leading newspaper editor Gibran Tueni, marching behind his coffin Wednesday in a display of anger against Syria that has been blamed for the car bombing which killed him Monday. (AP Photo/Hussein Malla)

One Arab paper is calling the UN Hariri Investigation and accusations against Syria a Zionist scheme:

The Egyptian Gomhouriya paper said in a commentary that events Lebanon has witnessed since the crime of killing former Lebanese Prime Minister Rafiq al-Hariri till the announcement of the second UN report in this respect were meant to intensify pressures on Syria.

The paper called Arabs to “face the US schemes aimed at serving Israel’s interests” warning that “evil hands are playing behind the scenes to fulfill its masters targets that have become crystal clear.”