There was a breach in the upper reservoir to the Taum Sauk Hydroelectric plant in Southern Missouri early this morning. A 20 foot wall of water came rushing down into the Black River like a gigantic bathtub of water being drained. 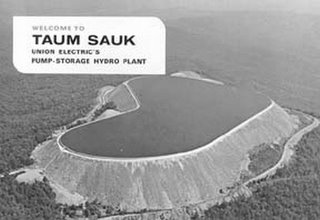 The reservoir on top of a mountain holds 55 acres of water. The plant was built in 1963 and stores approximately 1.5 billion gallons of water.

Update: Everyone has now been accounted for including those swept away in the water. Local communities have been evacuated.

A huge wall of water is washing homes away in Reynolds County Missouri. People are reported missing:

A wall of water is rushing down the Black River in Reynolds County south of the Upper Taum Sauk Lake Dam after the dam failed.

A fire dispatcher in Lesterville tells News 4 that crews released water from the reservoiraum Sa but apparently failed to open the dam. The dispatcher says that the pressure from the added water caused the dam to fail, sending a wall of water thundering down the Black River.

Marty Elmore with the Missouri Highway Patrol tells News 4 that residents who live along the river south of the dam are in peril.

The National Weather Service says that water levels along the river will rise 20 feet in a matter of minutes.

The facility is made of four parts: a 55-acre reservoir at the top of a mountain, a 7000-foot-long tunnel, a powerhouse with two reversible pump-turbine units, and a lower reservoir formed by a dam. 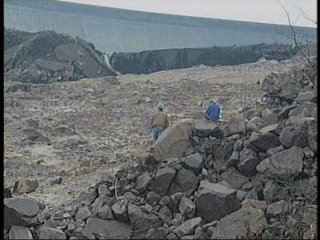 Here is picture of the lake/reservoir after it was drained from the breach early this morning. (KSDK)

Clark Mountain Musings says if the lower reservoir breaks it would add 6 feet of water.

The St. Louis Post Dispatch has more on the story:

The break occurred at 6:24 a.m. at the dam in Reynolds County, about 120 miles southwest of St. Louis. A family of five was rescued, and one person was missing, Reynolds County Sheriff’s dispatcher Ginger Bell said. But she said authorities have not yet been able to get to nearby Johnson Shut-Ins State Park.

A National Weather Service bulletin warned that the water would move rapidly downstream along the Black River, creating a “dangerous and life-threatening situation.” Residents of Lesterville and elsewhere downstream from the dam were urged to move quickly to higher ground.

Johnson Shut-ins is a huge and very popular recreation area. I am not clear if there would be many people in the area this time of year but will keep this updated.

Kokonut Pundits has information on the design of the dam/reservoir.

Update: (Wednesday AM) The AP is reporting that local communities have been evacuated, everyone has now been accounted for, and that a tractor trailer was swept off the road. There is no evidence of foul play at this time. This is a very rural area as you can see from the pictures or it would have been much worse… am looking forward to pictures of the drained mountain bath tub! 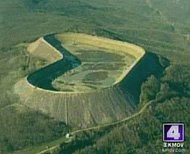 It appears (via KMOV) that the Taum Sauk reservoir/bathtub has spilled its 1.5 billion gallons of water down the Black River!

My Bad… this is an earlier shot of the empty reservoir. From the comments, Here is a website with more pictures and description of the reservoir.

Update 3: (Wednesday AM) The AP is reporting now that, “National Weather Service meteorologist Joe Pedigo said rescue teams were searching for people believed to be trapped in cars, especially along Highway N near the reservoir. Pedigo said a house, a mobile home, several cars and a tractor-trailer were reported washed away.”

Fellow St. Louis blogger, St. Wendeler from Another Rovian Conspiracy sent this picture from a flight over the reservoir earlier this year.

A semi sits in mud after it was swept off the road this morning. 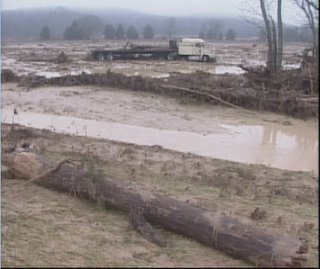 Three children, ages 5, 3, and 7 months, were hospitalized in critical condition. The 5-year-old and 3-year-old were intubated with breathing troubles, meaning medical personnel are helping them breath. The 7-month-old was suffering from hypothermia. It’s not clear if the three children were part of the family of 5 that was rescued. The older children are being taken by ambulance to Cardinal Glennon Children’s Hospital in St. Louis. Cardinal Glennon was sending an ambulance to the area to pick up the 7-month-old. A spokesperson says specially trained people are on that ambulance. He says that they would have sent a helicopter for the children, but the weather conditions won’t allow them to fly medical helicopters.

Update 5: This is funny, from reader Alicia J.:

Update 6: (Thursday AM) The family of Johnson Shutins Park Ranger Jerry Toops appear to be doing well this morning. They were rescued an hour or so after the wall of water obliterated their home, yesterday. The St. Louis Post Dispatch has the story of their harrowing adventure in this morning’s edition. As Governor Blunt says, “We need to keep (the Toopses) in our thoughts and prayers, particularly at this holiday season.”