“Race has everything to do with the ethnic cleansing and the massacre of the predominantly African American people.”

“I was one sunrise from being consumed by maggots and flies.”

“We left body bags behind.”

“It was an act of genocide.”

These are the statements told to a US congressional bipartisan select committee on Tuesday. The mainstream media lapped it up. 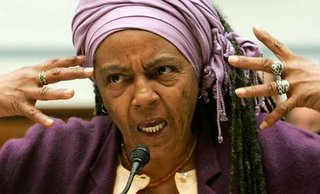 Victim’s anger: Dyan French, who stayed in New Orleans during the hurricane and its aftermath, gives evidence to the congressional committee. She claimed the city’s levees were purposely bombed. (Photo: AFP)

Representative Cynthia McKinney brought 5 black New Orleans’ residents to Washington DC on Tuesday to testify to what they claimed was a racist response by government to the natural disaster:

Black survivors of Hurricane Katrina said Tuesday that racism contributed to the slow disaster response, at times likening themselves in emotional congressional testimony to victims of genocide and the Holocaust.

The comparison is inappropriate, according to Rep. Jeff Miller (R-Fla).

“Not a single person was marched into a gas chamber and killed,” Miller told the survivors.

“Racism is something we don’t like to talk about, but we have to acknowledge it,” Cynthia McKinney said. “And the world saw the effects of American-style racism in the drama as it was outplayed by the Katrina survivors.”

The five white and two black lawmakers who attended the hearing mostly sat quietly during two and a half hours of testimony. But tempers flared when evacuees were asked by Rep. Jeff Miller, R-Fla., to not compare shelter conditions to a concentration camp.

“I’m going to call it what it is, it was a concentration camp” said Hodges. “That is the only thing I could compare what we went through to.”

“Yes, it was an issue of race. Because of one thing: when the city had pretty much been evacuated, the people that were left there mostly was black.”

The mainstream media outlets lapped up the testimony. But, it would have been easy enough for them to check out the facts.

Of the storm related deaths, most people still believe that blacks were exclusively overlooked and were a great majority of the victims. This just is not true. The recent data shows that even though 67.3% of the city of New Orleans is black only 48% of the victims were black:

The “racism” of Katrina, and images of thousands of poor, displaced blacks, triggered the greatest outpouring of charity in American history.

Most of predominantly white St. Bernard Parish victims were left sitting on rooftops not bridges for days after New Orleans had been evacuated.

Al Sharpton (who takes advantage of the poor while fleecing his own pockets) said at the Million More March on October, 15, 2005,…

“Bush is James Crow Jr….broken levees are weapons of mass destruction…Our people are dying in Iraq and being drowned in New Orleans.”

…the facts still don’t represent this.

But, the idea that Katrina was a racist relief disaster, that the government reacted slowly to the disaster, and that George Bush is racist is taken as fact without question from our American media.

The hearing on Tuesday had an impact on displaced resident R. Champagne who wrote in:

As a former resident of St. Bernard Parish, it truly sickens me to hear the race card played after Katrina. Damn those people! I’ve lost my house, my job, my neighborhood and my life and I don’t want to hear anymore bitching about racism and this hurricane. I’m so sick of the “laissez faire” attitude in New Orleans. They can have their wretched and corrupted city and state. I’m not going back. Hell no…..never. I’m almost embarresed to drive my car in Texas with a Louisiana license plate. I have so much anger built up against the City of New Orleans, Nagin, that Blanco POS… Now the nation gets to sit back and watch the corruption erupt when the millions of dollars start pouring in for “reconstruction”. I’ll gladly watch the fracas from Texas!

Even gangsta rappers are blaming low sales on “racist Bush”.

The Anchoress has a really terrific post today on racism and Katrina.

Update: (December 12, 2005) Will Frankin has much more on the hurricane victims.

Michelle Malkin takes a closer look at “Who died in New Orleans.”