The rest of Europe may be in an uproar, but not former Warsaw Pact Country Romania. The Romanian Administration sent out its most famous VIP, Nadia Comaneci, to welcome US Secretary of State Condoleezza Rice and plans for a new US military base near the Black Sea. 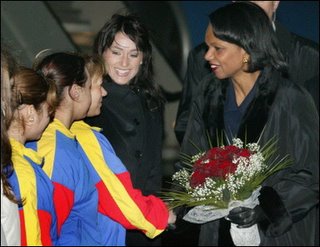 US Secretary of State Condoleezza Rice (R) is welcomed by former Romanian gymnast Nadia Comaneci (C) together with members of the Romanian gymnastics team at Otopeni airport in Bucharest. Rice and her Romanian counterpart signed a historic pact Tuesday establishing the first American military bases in a former Warsaw Pact country. Rice said the U.S. takeover of bases near the Black Sea _ putting American forces within closer striking distance of potential targets in the Middle East and Central Asia _ would help “take terrorists off the streets” and save lives around the world.(AP Photo/Vadim Ghirda)

In Bucharest on the second leg of a four-nation European tour, Rice signed the deal with Foreign Minister Razvan Ungureanu at a public ceremony in the Romanian capital.

Condoleezza received a warm welcome in the Ukraine, a partner with the the US in democracy and the War on Terror. 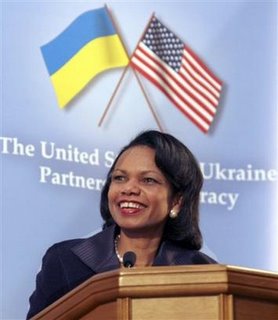 U.S. Secretary of State Condoleezza Rice smiles during a meeting with students of Taras Shevchenko university in Kiev, Ukraine, Wednesday, Dec. 7, 2005. At the meeting in Ukraine’s most prestigious university, Taras Shevchenko, Rice thanked Ukraine for its contribution to the U.S.-led war in Iraq. (AP Photo)

In the Ukraine, Condoleezza said, “We look forward to further working with this team, that is so committed to democracy,” after a meeting with the reformer President Viktor Yushchenko who came to power in the ex-Soviet nation after leading last year’s “orange revolution” protests against an entrenched pro-Russian regime.

Condoleezza is on a trip to Europe highlighted by Western media attacks on the Bush Administration over leaks of private foreign CIA prisons.

Meanwhile, as the media continued its attacks on the Bush Administration for prisoner/terrorist abuse, a poll came out reporting that most Americans approve of torture for terrorists in this global war we are fighting.
(Hat Tip Glenn Reynolds)

President Bush announced plans last year to redistribute foreign troops and eventually to bring back home 60,000-70,000 US uniformed personnel and up to 100,000 civilian support staff.

“The world has changed a great deal, and our posture must change with it – for the sake of our military families, for the sake of our taxpayers, and so we can be more effective at projecting our strength and spreading freedom and peace,” said Mr. Bush.

The president mentioned no countries by name, although there have been strong signs the administration wants to reduce U.S. troop levels in Germany and South Korea. Officials have also indicated that while many of the military men and women affected will be sent to bases back home, there will be new deployments in Eastern Europe.

“The new plan will help us fight and win these wars of the 21st century. It will strengthen our alliances around the world, while we build new partnerships to preserve the peace,” he said.

Romania is the first former Warsaw Pact country to sign on to the plan.