Diane Wilson, founder of the hyper-Leftist group Code Pink infiltrated the Tom Delay fundraiser on Monday night. Vice president Dick Cheney was in attendance. Wilson disrupted the VP’s speech at the dinner and was arrested and escorted out of the event.

She donated $50 to Tom Delay for her seat at the dinner. 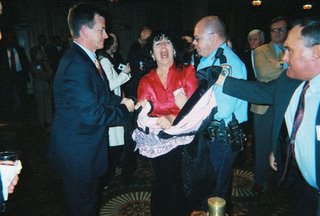 Diane Wilson was detained during the dinner and escorted out of the event.

This is not the first time that Code Pink has taken credit for rushing Vice President Cheney. He was also confronted during the Republican National Convention by Medea Benjamin, the founder of the Marxist group Global Exchange and a member of Code Pink. 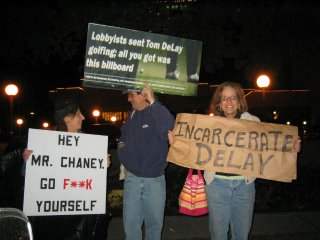 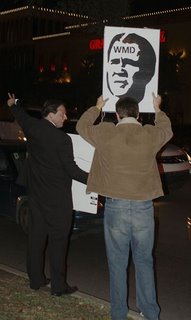 Is it really a secret on who the Left is fighting anymore? 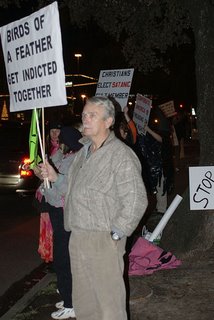 This is the vice president’s first appearance on DeLay’s behalf. As the high-dollar private event took place inside the Westin Oaks Hotel in the Galleria, protesters voiced their displeasure outside.

The fundraiser occurred on a day of mixed news for DeLay, who earlier this year was indicted by a Travis County grand jury on charges of conspiracy and money laundering. The indictments forced him to step down as House majority leader.

Money laundering charges were upheld Monday, but the judge dismissed charges related to any conspiracy to violate Texas election code.

According to those in attendance at the fundraiser, the vice president talked about the White House’s long-term strategy on Iraq and tax cuts, among other things. 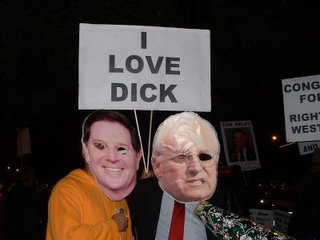 On Tuesday, Democratic Party Leader Howard Dean was interviewed on the radio and said, ” the idea that we’re going to win the war in Iraq is an idea which is just plain wrong.”

Michelle Malkin and the Anchoress have more on the Dean comments.

Babalu discusses the Code Pink trip to the Worker’s Paradise.