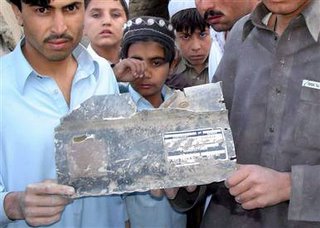 Pakistani tribesmen are seen on Thursday displaying a piece of a U.S. made laser guided missile, found in the debris of a house which was destroyed after alleged American Predator aircraft, which flew from bordering Afghanistan, fired on the house, killing five people including a senior al-Qaida commander identified as Abu Hamza Rabia.

The operational commander of al-Qaida and possibly the No. 3 official in the terrorist organization, Hamza Rabia, was killed early Thursday morning by a CIA missile attack on a safehouse in Pakistan, officials told NBC News.

“Yes indeed, 200 percent. I think he was killed the day before yesterday if I’m not wrong,” President Pervez Musharraf told reporters as he arrived in Kuwait on an official visit on Saturday.

Pakistan had a reward for his capture or death after a failed attempt to assassinate President Musharraf in December 2003.

It will be interesting to see how the Pakistanis react to seeing parts from a US missile inside a destroyed home in Pakistan. I am positive we will see protests against the US this week somewhere in Pakistan (not that this is unusual)… Oh well.

Winds of Change takes a closer look at this and other recent events including links to news that another Saudi born Al Qaida official blew himself up in Dagestan, Russia.

Saudi born Shaykh Abu Omar al-Saif blew himself when he was cornered by the Russian military on top of a house according to reports on Friday. He was not a good man:

Known as the “Imam of the Chechen mujahideen”, Abu Omar was an original founder of the Arab-Afghan mujahideen movement in Chechnya and was named by Russian officials as a suspect in numerous Caucasus-linked terrorist attacks, including the Moscow theatre siege and the Beslan school hostage massacre.

Abu Omar wrote some moving words to his brothers in arms before the Iraqi vote in January:

…The United States has left its homeland filled with hypocrisy and pride, seeking to elevate its status on this earth. It wanted to do so by pushing Muslims away from their religion and pulling them instead towards the religion of infidel democracy. The devil has misled them and made their evil actions seem appealing. It is described throughout their lying media that the US is the mightiest country in the world… (blah, blah, blah)

He obviously has not kept up with our media! As they say in Bahrain, “Straight to Hell”.

It is amazing how these international terrorists are so closely linked. Global Terror Alert has an incredible diagram that shows the international links between all of these major terrorists. The Dagestan area has seen a surge in recent violence spread by terrorists from nearby Chechnya.

California Conservative has more thoughts on the under-reported advances in the War on Terror.

California Yankee is also on the Dagestan story.

However, Stafania at Free Thoughts notes that with the “two steps forward” there is “one step backward” as a Fatwa is declared on cartoonists in Denmark.