Reuters and The New York Times are reporting that the slaughter of social (democracy) protesters was in “Dongzhou in Guangdong province” near Hong Kong. However, as you can see from the maps below, there is a Dongzhou near Beijing. Guangdong Province is the region surrounding Hong Kong.

This is for certain. The village is close to Hong Kong and is located in the Guangdong province somewhere close to Shanwei.

Taishi, another village near “Guangzhou”, China has been at odds with the Communist Party since holding “social change” protests earlier this year. Below, authorities invade and squash a protest in Taishi earlier this year. 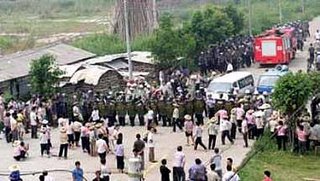 The villagers are shocked… “We didn’t expect them to be so evil!”

China slaughters at least 20 democracy protesters! The protesters were having a sit-in demonstration when the officials started firing on them:

Residents of a fishing village near Hong Kong said that as many as 20 people had been killed by paramilitary police in an unusually violent clash that marked an escalation in the widespread social protests that have roiled the Chinese countryside. Villagers said that as many as 50 other residents remain unaccounted for since the shooting. It is the largest known use of force by security forces against ordinary citizens since the killings around Tiananmen Square in 1989. That death toll remains unknown, but is estimated to be in the hundreds.

The violence began after dark in the town of Dongzhou on Tuesday evening. Terrified residents said their hamlet has remained occupied by thousands of security forces, who have blocked off all access roads and are reportedly arresting residents who attempt to leave the area in the wake of the heavily armed assault.

“From about 7 p.m. the police started firing tear gas into the crowd, but this failed to scare people,” said a resident who gave his name only as Li and claimed to have been at the scene, where a relative of his was killed. “Later, we heard more than 10 explosions, and thought they were just detonators, so nobody was scared. At about 8 p.m. they started using guns, shooting bullets into the ground, but not really targeting anybody…

…On Dec. 6, while villagers were mounting a sit-in demonstration, police made a number of arrests, bringing lots of people out into the streets, where they managed to detain several officers. In response, hundreds of law enforcement agents were rushed to the scene. Everybody, young and old, “went out to watch,” said one man who claimed his cousin had been killed by a police officer’s bullet in the forehead. “We didn’t expect they were so evil. The farmers had no means to resist them.” 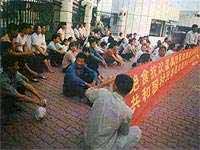 In August, for more than three weeks, villagers in Taishi in southern China camped out in their village hall demanding the ouster of the mayor and new elections. Riot police violently broke up the protest on August 16, 2005.

Police have now sealed off the city after the two days of violence. Authorities are now detaining people in the village:

Residents said riot police had opened fire on Tuesday on protesters in the village of Dongzhou in Guangdong province after they moved in to quell the unrest. Estimates from residents and rights groups put the number of dead between two and 20.

“Now the authorities are coming to the village to detain people,” said one villager, adding his brother was among those shot dead during the demonstrations.

“My parents and my sister-in-law are kneeling in front of the house to ask the government officials to explain the killing,” he said in a telephone interview.

He put the number of dead at more than 10 and said bodies were lying in the villagers’ houses.

Chinese Human Rights activists have been traveling to actively support the protesters in Taishi this year. One activist, Lu Banglie, was severely beaten in October in Taishi. Still, Lu Banglie says he is committed to continue his campaign for more democracy in China despite the attack on him.

Chinese officials are now denying the reports that government forces fired into the crowd of protesters.

Blogs for Industry has more from Hong Kong news outlets.

Look for Peking Duck, a great blog on China, to follow this story.

Pajamas Media is reporting the story.

Update: (9:20 PM CST) Wow! Daai Tou Laam has the latest with reports of Chinese officials offering hush money to those who lost a family member!

Update 2: (Early AM 12-10) The death toll rises to 33! For an updated posting with pictures I found snuck out from the town of Dongzhou, go HERE.