“I’ve seen relatives of the people who were killed kneeling in front of the police asking them to return the bodies,” said a villager surnamed Wei.

“But the police have refused to hand over the bodies. They’ve taken them away, and we don’t know were they are at the moment,”

The brutal crack down on the protesters is the deadliest use of force by Chinese authorities since the Tiananmen Square massacre of 1989.

Photos of the incident have made their way to the Wetern Media at great risk to the photographer. 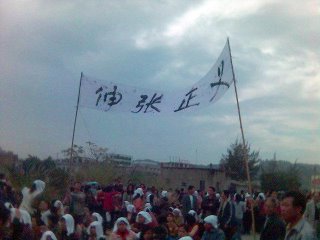 Protesters gather in Dongzhou Village of Shanwei, China. Police fired on protesters on December 6, 2005 killing an estimated 33 villagers. The photos pictured here were taken at great risk by Epoch Times reporters in China. They show a village in China grieving for its dead and the callous nature of the Communist Party that ordered the shootings that killed them.

Dusty Attic has a must read post describing the area around Shanwei. 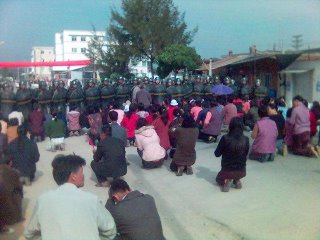 Family members of those that were killed in Dongzhou village beg police to get the bodies of their loved ones for burial. (The Epoch Times)

The story is starting to trickle out of Shanwei, China of the massacre this week of village protesters by government forces. Epoch Times reports that the death toll is at 33 and 20 are missing:

According to villagers in Shanwei, Guangdong province, at 5pm of December 6, approximately two thousand armed police and riot police arrived in Dongzhou village of Shanwei city. They surrounded the hillside and conflicts broke out between the police and villagers who were trying to protect their land. The armed police fired shots at the villagers. So far, thirty-three have been killed and several dozen injured. Two village representatives were arrested.

Villagers said, that apart from shooting them, the armed police used tear gas to drive them away from the hills.

An injured villager told the reporter, “I was shot. The bullet shot my arm and penetrated my arm.”

Until December 7, the Shanwei City government had the village under police lock-down, controlling the movements of the villagers– not letting them go anywhere near the scene of the shootings.

Local officials had offered one family hush money if they surrendered the body of their loved one to the authorities. 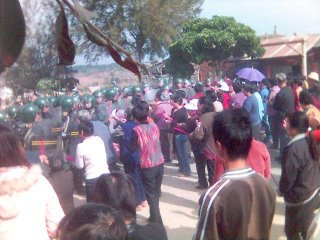 The family members of those that were killed in Dongzhou village kneeled down to police and asked for getting the bodies back. (The Epoch Times)

On November 17, 2005, Chinese Democracy Activist Mr. Zhao Xin was severely injured in a beating in Sichuan. It took a total of 11 stitches to close four wounds on his head. The bone in his right leg was fractured; tissue in his calf muscle was destroyed; and two of his ribs were broken.

Pajamas Media has listed several bloggers with information on this story.