After slaughtering embittered land rights protesters in Dongzhou Village of Shanwei last Tuesday, Chinese officials released a report today claiming that the government is cracking down of corruption in the country as new protests hit Shanghai. 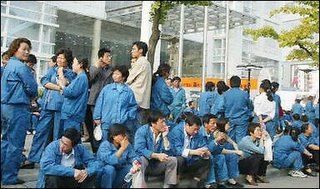 A group of workers gather outside the Shanghai municipal government building to protest against corruption. China has prosecuted and punished nearly 50,000 corrupt officials over the past two years during an on-going campaign against graft, official media have said quoting a senior state prosecutor.(AFP/File/Liu Jin)

The report claims that China has prosecuted 50,000 corrupt officials in over the past two years:

Wang made his comments during a conference in the southern city of Shenzhen but no details of the corruption cases were given.

A national audit earlier this year found that graft remained widespread in the government, with ministries including finance, education and health all misusing funds last year.

Reporting the findings of the National Audit Office in October, state media said the amount of improperly or illegally-used funds hit 9.06 billion yuan (1.11 billion dollars) in the 2003-04 fiscal year.

The Organisation for Economic Cooperation and Development said in September that corruption was endemic in China and had grown during its economic reform period, threatening the legitimacy of the communist government.

Protesters last week were slaughtered by Chinese Communist Regime forces while they were protesting against what they said was an unfair and corrupt land deal. 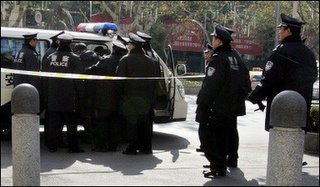 Shanghai police load a property rights protester into a van after detaining him for raising a protest banner outside the site of a Communist Party meeting. Thousands of Chinese who petition the authorities for redress of grievances are attacked, intimidated and detained, Human Rights Watch (HRW) says in a new report(AFP/Mark Ralston)

China has had its hands full this year with protests and crackdowns throughout the country.

In November, Chinese officials demolished a Beijing artists colony in what many feel was a political attack on China’s neo-progressive movement:

On Nov. 14, however, police informed the landlord that the colony in Suojiacun, an artists’ village in a rundown section of northeast Beijing, would be leveled within 24 hours. The following day, police arrived at 8 a.m. with several moving trucks and an ambulance, smashing walls in a portion of the complex, carting off furniture and scattering possessions.

As they left, officers warned the remaining tenants that their places would suffer the same fate within 10 days.

“It’s a case of killing the chicken to scare the monkey,” said Xing Danwen, a contemporary artist who incorporates circuit boards and broken cellphones into her works, citing an old Chinese expression about using fear to set an example.

Disputes over land use, ownership and building permits are not unusual in a country that still officially has no private property, where the law is a movable feast and rights are often only as good as one’s connections.

But artists at the colony say they believe something else is at play.

“Since Mao’s day, art was supposed to serve the government. But contemporary art is critical of contemporary society and often seen as subversive,” Zhang said.