ONLY ONE QUARTER OF VOTERS SHOW UP FOR ELECTION IN VENEZUELA,
VIDEO HERE

The poster of Chavez reads, “By ten million votes, for the country and for sovereignty.” …But only an estimated 3 million voters turned out at the polls! 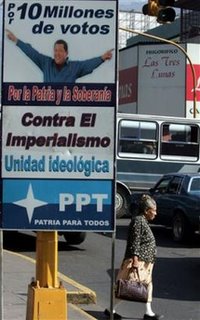 Only 25% turnout in Congressional election is huge embarrassment for Chavez:

Venezuelan President Hugo Chavez’s political party said it had won 114 out of 167 seats in the Congress after opposition parties dropped out of elections protesting against bias by electoral authorities.

The National Electoral Council has still to provide final results. But with just 114 MVR seats in the Congress, the pro-Chavez alliance would have more than the two-thirds it needs to press for what they call necessary reforms, such as allowing unlimited re-election to the presidency, which opponents fear will give even greater authority to the former army officer.

Chavez, a frequent critic of Washington, has accused US officials of orchestrating the boycott to trigger a political crisis. But he said the move included only a minority of candidates and could not invalidate the vote.

“These old parties, they are already dead – but they are still hanging on, resisting death,” Chavez said after casting his vote in Caracas. “Now they’ve accelerated their own demise.”

Only 25% of about 12 million registered voters showed up.

The BBC which has a knack of propping up the Marxist Chavez also carried the story today.

Not much action at the polling stations made for a long, unexciting day for the election workers. 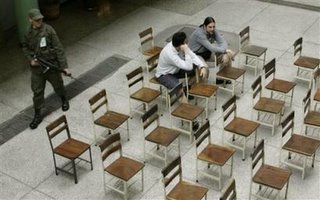 Miguel Octavio and A.M. Mora y Leon from Publius Pundit were in Caracas and had much to say about the election where nobody came:

Miguel Octavio and I went across the entire city of Caracas in search of a polling station full of people. Or half full. Or people at all! We targeted the most likely places like the slums of East and West Caracas (heroic of Miguel to drive the long length of the enormous city) because we wanted to find some, any, place where polls were happening.

Jorge Rodriguez says abstention was 75%. This is a disaster for Chavismo. I would like to see how many void votes there are, from the numbers he is mentioning it sounds like 25% were void or null votes, so it appears those that feared reprisal voted null, so this is really bad for the Government. Still votes look high to me from what I saw today in the poor areas of Caracas.

At the end Jorge Rodriguez said literally: “It is forbidden for the National Electoral Juntas to issue results which contradict this one”

What is the exact meaning of this sentence?

By the way, whatever happened to the 10 million votes? Where are the 6 million plus missing? In the opposition or waiting for an alternative to Chavez?

A. M. Mora y Leon has much more on his Venezuelan election experience over at Publius Pundit where he drove around Caracas and didn’t see any turnout at all. 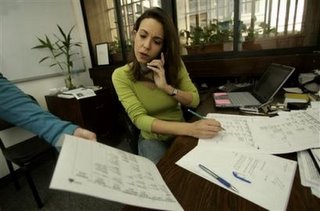 Maria Corina Machado, a leader of the Venezuelan elections monitoring group, Sumate, works in her office in Caracas, Venezuela, Thursday, Dec. 1, 2005. Leaders of Sumate, an organization that calls themselves defenders of democracy, are at the center of a political crisis as the country’s main opposition parties boycott Sunday’s congressional vote. The group complains there are many problems with the voting system, while the government has begun running advertisements on state TV attacking Machado as a dark figure paid to do Washington’s dirty work in Venezuela. (AP Photo/Leslie Mazoch)

Maria Corina Machado met with President Bush at the White House earlier this year. Ms. Machado is the founder and executive director of Sumate, an independent democratic civil society group in Venezuela.

Chavez ended up taking all of the Congressional seats in the election which will enable him to remain in office permanently:

A two-thirds majority in parliament will allow Chavez to remove the country’s constitutional limit of two presidential terms in office. Chavez opponents say the low turnout shows the election was not legitimate.

Three small explosive devices were detonated at a government office and an army base in Caracas Friday. No one claimed responsibility for the incidents but the government described it as an attempt to “disturb” the voting process.