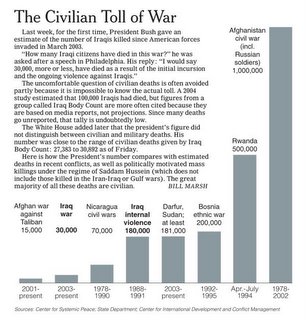 This number of civilian(?) casualties lost during war, as sad as it is, is at a rate less than when Saddam was in power and filling his mass graves. 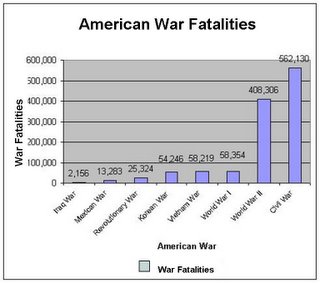 Russia lost more soldiers in peacetime than we did in Iraq last year.

And, Pre-Katrina New Orleans had a murder rate that compares with both the US military and Iraqi civilian deaths combined.

Joe’s Dartblog wonders what happened to the media’s earlier claims.

Driftwood prepared a timeline comparison of Iraq with Germany.

Obviously, the men and women of the United States Military and fellow Allies are not “broken, worn out” and “living hand to mouth” but are doing a brilliant job in supporting Iraq in its transition from a murderous dictatorship to a functioning Middle Eastern democracy in just 1,000+ days!

Update: I have included the suggestion on “fatalities” verses “casualties”.