Ours is a confident and optimistic nation — and our trust in the American people has brought us through some pretty tough times. In the past five years, our economy has endured a stock market collapse, a recession, terrorist attacks, corporate scandals, high energy costs, and devastating natural disasters. These were all shocks to our economy, which I felt required decisive action. I believe that economy grows when people are allowed to keep more of their own money, to be able to save and to spend. (Applause.)

These cuts are making a real difference to American families. 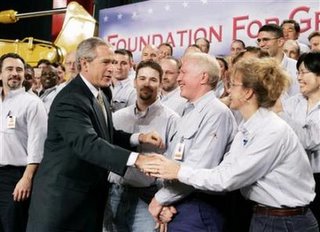 Just this past Friday, the latest figures show:

* Our economy added 215,000 jobs in the month of November alone.
* Our unemployment rate is down to five percent.
* Unemployment is lower than the average of the 1970s, the 1980s and 1990s.
* The latest numbers also show the economy grew at 4.3 percent last quarter.
* And it has been growing at near that average for more than two years.
* This economy of ours is on the move.
* Americans are buying homes, and that’s good news for this country. We hit an all-time high in October, in terms of home buying.
* More Americans now own their homes than any time in our nation’s history.
* Minority ownership — home ownership is at an all-time high in the United States of America.
* Real disposable income is up
* Our consumers are confident.
* New orders for durable goods, like machinery, have risen sharply, and shipments of manufactured goods are up, as well.
* Business activity in our manufacturing sector reported its 30th straight month of growth.
* In the past five years, productivity has grown at some of the fastest rates since the 1960s.
* Our small businesses are thriving.
* Fortunately, I didn’t listen to the pessimists about tax cuts. The tax cuts are working.
* We’ve cut the rate of growth in non-security discretionary spending.
* We’re on track to reach our goal of cutting the budget deficit in half by 2009.

Thanks to tax relief, and spending restraint, and pro-growth economic policies, this economy is strong, businesses are booming, and the people in this country are working. (Applause.)

But, even today after the president’s speech and numerous points of fact, the mainstream media could still not get itself to report accurately on the good economic news:

AFP reported that, “Bush tried to soothe the economic worries of a skeptical US public, amid polls that show broad pessimism about the future despite some encouraging data.”… as if there is just a bit of good economic news.

Deb Riechmann from the Associated Press leads her article talking about pension protection.

FOX News reported that, “Bush told Americans Monday that the economy is doing much better than polls suggest they think it is, but he warned that the pension system is in trouble because too many companies aren’t making good on their promises.” …The media likes to report that Bush “Says” the economy is doing well as if it is just a silly claim by the president and not based on strong data.

Maybe the media reporting could have something to do then with Bush’s approval on handling the economy that was at 37% in an AP-Ipsos poll in early November? Maybe?

National Review has more on the Bush Boom.