As Iraqis return home from their historic vote, Democrats demand a plan! 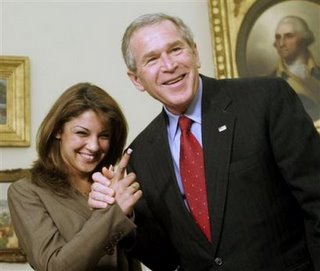 President Bush, right, holds up the right voting finger of Zainab Kassem Mohammad, of Baghdad, during his meeting with Iraqi out-of-town voters, Thursday, Dec, 15, 2005 in Washington. President Bush hailed Thursday’s voting in Iraq as ‘a major milestone’ in establishing a democratic ally for the United States in the Middle East and moving toward the day when American troops can come home. (AP Photo/Pablo Martinez Monsivais)

I’ve just had the really enjoyable experience of visiting with some Iraqi citizens who voted in the elections today. And you might notice, they’ve got their — got the little ink-stained fingers there.

And there’s a lot of — lot of joy, as far as I’m concerned, in seeing the Iraqi people accomplish this major milestone in the march to democracy. Millions of people voted. And I haven’t seen all the tabulations of the vote, but we’re certain that the turnout was significant and that the violence was down.

Bush told the Iraqi voters not to listen to the negative commentary and that the US will stay until the job is done. 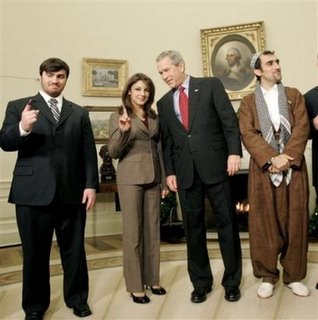 I want to congratulate the Iraqi citizens for being courageous and in defying the terrorists and refusing to be cowed into not voting. I believe freedom is universal. I believe the Iraqi citizen cares just as much about freedom and living a free life as the American citizen does.

I’ve assured these good Iraqi citizens that the United States will stay with them and complete this — complete this job. They’ve expressed concern about listening to the commentary that we’ll leave before the job is done — they don’t have to worry. We’re doing the right thing. And we’ve got partners in peace with the Iraqi citizens.

John Kerry suggests impeachment.
Senator Harry Reid says Iraq must get its house in order.
Senate Democrats demand more information on Iraq Stategy(?)
Howard Dean says his “We can’t win in Iraq” statements were taken out of context but “If we don’t change something in Iraq, we can’t win!”

And, Nancy Pelosi does not disappoint with:

“I am pleased that Iraq appears to be moving towards democracy, as indicated by tomorrow’s upcoming election. However, democracy is not the reason that President Bush gave for invading Iraq more than 1,000 days ago.”