“This is the second day that Vice President Dick Cheney had brought attention to important democratic events that have stemmed from the Bush administration’s hawkish foreign policy.”
–Associated Press(?)–

In the first time in more than three decades Afghanistan opens Parliament. 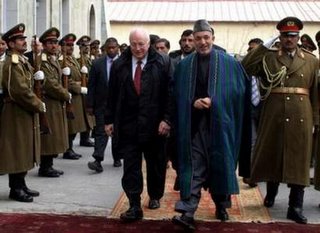 Afghan President Hamid Karzai (centre R) and U.S. Vice President Dick Cheney (centre L) inspect guard of honor at the Afghan presidential palace in Kabul December 19, 2005. Karzai thanked God for giving Afghanistan the chance to take control of its destiny again after swearing in the 249 members of the Wolesi Jirga, or lower house, and 102 members of the upper house, or Meshrano Jirga. (REUTERS/Omar Sobhani)

Vice President Dick Cheney helped honor Afghanistan today at the inaugural session of the newly elected Parliament. Even the AP was impressed with the events of the last two days:

The vice president’s somewhat chaotic arrival in Kabul marked the second day he had brought attention to important democratic events that have stemmed from the Bush administration’s hawkish foreign policy.

On Sunday, Cheney made an unannounced trip to Iraq to highlight last week’s parliamentary elections there. In Kabul, he attended the inauguration of the politically diverse 249-seat assembly, Afghanistan’s first elected parliament in more than three decades.

“The victory of freedom in Afghanistan as well as Iraq will be an inspiration to democratic reformers in other lands,” Cheney said in a speech to troops at Bagram Air Base.

At the parliament, Cheney and his wife, Lynne, sat in the front row to the left of a speakers’ podium. Along with two other U.S. representatives — Ambassador Ronald E. Neumann and coalition commander Lt. Gen. Karl Eikenberry — Cheney listened through an earpiece to an English translation of the speakers’ remarks.

After the ceremony Cheney signed a guest book, writing, “It’s a privilege to be present on this historic day for the people of Afghanistan.”

CHENEY MADE A SURPRISE STOP IN IRAQ ON HIS WAY TO AFGHANISTAN,
VIDEO HERE 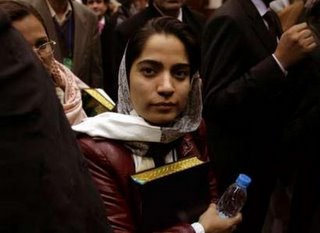 Member of the parliament Malalai Joya holds a copy of the holy Koran after the inauguration of the first Afghan parliament in decades in Kabul, Afghanistan December 19, 2005. Warlords, former communists, Taliban defectors and women activists were sworn in on Monday as members of the first Afghan parliament in more than 30 years amid hopes of national reconciliation after decades of bloodshed. (REUTERS/Ahmad Masoodd)

The Vice President also made a stop at Bagram Airfield in Afghanistan. Here is the speech he gave to the troops stationed there where he pounded home the message that we are in Iraq for the long haul:.

I also want you to know, ladies and gentlemen, that I was in Iraq yesterday, and spent some time with soldiers, Marines, and Navy corpsmen serving in the western part of the country. Your comrades are doing fantastic work over there. On occasion they receive mixed signals from politicians about whether America has what it takes to stay in the fight. I assured them that the American people do not support a policy of submission, resignation, and defeatism in the face of terror. In the war on terror we are up against an entirely new kind of threat to our security — a threat global in scale, and often hidden from view. And the United States has made a decision: We will engage the enemies of civilization. We will face them with our military far from home, so we do not have to face them on the streets of our own cities.

Cheney stopped in Iraq yesterday on his way to Afghanistan to talk with and congratulate the troops and Iraqis for another successful election on Thursday. 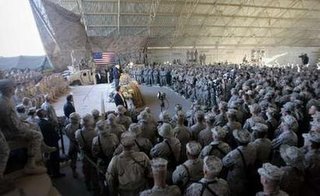 U.S. Vice President Dick Cheney addresses Marines at Al-Asad Air Base in Iraq December 18, 2005. Cheney visited Iraq on Sunday for the first time since the 2003 invasion, as hardline leaders from both sides of the country’s sectarian divide renewed calls for American troops to go home. (REUTERS/Lawrence Jackson)

The special treatment stopped at the gates of Parliament with Dick and Lynne Cheney:

The Afghans allowed Cheney’s military aides through but insisted on doing complete body searches of the rest of his traveling party. Men were searched outside in a dusty courtyard, while women were taken in a small room and searched completely by hand by Afghan women.

In other hostile territory, President Bush took on the media today in Washington:

Afghan Lord (via Stefania) talks about this historic day for Afghanistan today.