Louisiana is asking Congress for $250 Billion in federal aid! 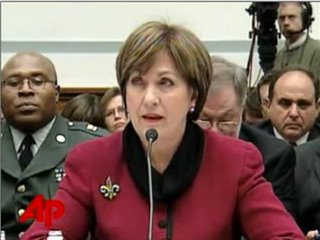 But Governor Haley Barbour from Mississippi is having problems with Louisiana’s “pet project funding” and says it puts a damper on Congress’s ability to deal with the disaster:

“When Louisiana requested $250 billion, people were shocked and taken aback,” Barbour said Wednesday in a meeting with the editorial board of the Hattiesburg American.

“It was like they proposed every pet project they had been hoping to do for the last 50 years,” he said.

As to how much of the requested funds will go to levee construction:

Concerning the critical levee issue, U.S. Sen. David Vitter, R-Metairie, said late Tuesday that he, U.S. Sen. Mary Landrieu, D-New Orleans, and the governor were discussing asking Congress for $5 billion in levee construction, including $4 billion to rebuild a true Category 3 protection system and a $1 billion down payment on levees able to withstand a Category 5 storm.

That leaves $245 Billion for various other projects.

There is currently an ongoing federal investigation looking into possible corruption in the design, construction and maintenance of the New Orleans levee system.