Poll Says Americans want to finish the job in Iraq and Iraqi Sunnis give insurgents another blow.

Despite the big push by Congressional Democrats, the “Cut and Run” option is not the preferred choice of most Americans. A new poll released today:

A solid majority of Americans oppose immediately pulling U.S. troops out of Iraq, citing as a main reason the desire to finish the job of stabilizing the country, an AP-Ipsos poll found.

Some 57 percent of those surveyed said the U.S. military should stay until Iraq is stabilized, while 36 percent favor an immediate troop withdrawal. A year ago, 71 percent of respondents favored keeping troops in Iraq until it was stabilized.

Some 49 percent of Americans now say the war with Iraq was a mistake, according to the poll of 1,006 adults conducted Tuesday through Thursday. That compares with 53 percent in August.

The election on Thursday was a great success for Iraq and the region. 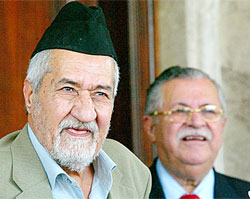 Meanwhile, Aljazeera reports that a leading Sunni politician says he is willing to form a majority party with secularist Iraqi Kurds and Shia:

A leading Sunni Arab politician in Iraq has said his party will be open to an alliance with secular Shia and Kurds to form a coalition government to run the country once the results are in from parliamentary elections.

Adnan al-Dulaimi, the head of a Sunni Arab bloc, said on Friday: “We will not accept the exclusion of any segment of the Iraqi people unless they themselves don’t want to participate.”

Al-Dulaimi predicted that religious Shia parties would be unable to form a government, even though they are widely expected to take the most seats.

This positive move by Adnan al-Dulaimi would help the stability situation in Iraq by bringing more Sunnis into government.

President Bush is going to address the nation on Iraq Sunday night from the Oval Office.

Representative Murtha proposed a “Cut and Run” plan for Iraq in November similar to his stance on the Conflict in Somalia in 1993.

** This is interesting,… Representative Murtha’s tone has changed from his original stance of “it’s time to cut our losses and run” to “we need to redeploy”. **