After Crips Co-founder Tookie Williams was put to death last week, activists in Governor Arnold Schwarzenegger’s hometown of Graz, Austria started a petition to remove Arnold’s name from the city stadium. Activists were upset that Arnold did not pardon Tookie Williams for the quadruple murders he committed.

Austrian activists and politicians who proudly bore his name before said they wanted to rename the stadium Stanley-Williams Stadium. 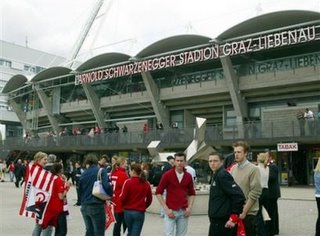 Soccer fans wait outside the Arnold Schwarzenegger Stadium in Graz, Austria, in this file photo taken Sunday, May 9, 2004. Schwarzenegger has told officials in his Austrian hometown to remove his name from the sports stadium and to stop using his name to promote the city. The governor’s move comes after politicians in Graz began a petition drive to rename the stadium, reacting to Schwarzenegger’s decision last week to deny clemency to condemned inmate Stanley Tookie Williams. (AP Photo/Markus Leodolter)

Word of this uproar reached Cal-ee-fornia and Arnold effectively terminated his ties with the town on Monday by demanding that the town take his name off of the stadium and quit using his name in promotions:

Schwarzenegger demanded that Graz stop using his name on a sports stadium and in promotions and returned a “ring of honour” he had been awarded by city officials in 1999, saying politicians in his hometown appeared to have rejected him.

A petition drive had been launched in Graz to have the town rename a stadium that has been named after Schwarzenegger because the Austrian-born governor allowed the execution of death-row inmate Stanley Tookie Williams this month.

Williams, an ex-leader of the Crips gang who supporters said had redeemed himself by campaigning against gang violence, was executed by lethal injection on December 13 after Schwarzenegger and the courts rejected all of his appeals.

The city council of Graz had been due to rename the local stadium on January 19, according to Schwarzenegger’s letter to Graz Mayor Siegfried Nagl.

“The reason for this action is apparently a decision I reached as governor of California,” Schwarzenegger said. “I rejected the clemency of a rightfully convicted four-time murderer after thorough review, and as a result, he was executed according to the laws of this state.”

“In all likelihood, during my term as governor I will have to make similar and equally difficult decisions,” Schwarzenegger wrote. “In order to spare the responsible politicians of the city of Graz further concern, I withdraw from them as of this day the right to use my name in association with the Liebenauer Stadium.”

Arnold worked out at the stadium prior to becoming world body building champion:

Schwarzenegger, a former body building champion and Hollywood star, trained at the stadium as a young man. It was renamed in his honour in 1997.

He said he was returning the “ring of honour.”

Since “the official Graz appears to no longer accept me as one of their own, this ring has lost its meaning and value to me,” he said. “It is already in the mail.”

On Tuesday, the Mayor of Graz lashed out at local activists after Arnold cut ties with the town:

The mayor of Californian Governor Arnold Schwarzenegger’s home town in Austria lashed out at the governor’s critics on Tuesday, a day after Schwarzenegger severed ties with his birthplace in a dispute over his support of the death penalty for murder.

Siegfried Nagl, mayor of the southern city of Graz, accused the Social Democrats, Greens and others who have opposed Schwarzenegger of orchestrating an “embarrassing farce” and insisted that most locals were proud of Schwarzenegger.

Nagl told the Austria Press Agency he at least wanted to prevent Schwarzenegger from returning the ring. (Too late!)

Also on Tuesday, the mayor called and begged Arnold not to cut ties with the town:

Siegfried Nagl, mayor of the southern city of Graz, said he wrote Schwarzenegger pleading with him not to return a ring of honor bestowed on him by officials in his birthplace in 1999 and reassuring him that most residents still admire him.

“I hope that very soon we’ll hear you say, ‘I’ll be back,'” Nagl told the actor-turned-politician, one of Austria’s most famous sons.

Hermann Schuetzenhoefer, a tourism adviser in the province of Styria where Graz is located, said Tuesday he also wrote a letter to Schwarzenegger expressing regret “that some politicians who proudly bore your name a few years ago are dragging it through the dirt now.”

Figures! Serves them right, the Barbarians.

You would think that it would strike someone over there before they started spouting off at the mouth, that there are laws in this country that must be upheld. How bold of the activists to assume that this was an easy decision for someone with such solid integrity and heart as Arnold Schwarzenegger.

Arnold says he plans on a trip back to Graz when he gets an opportunity. I think it will be awhile.

Ace is impressed with how Arnold handled his “highly principled moral superiors”.