Are Islamic Leaders Changing Their Tune on Terror?

Last month, King Abdullah of Jordan said in an interview with the Financial Times, “There’s a problem inside of Islam. The problem is not Jordan or the United States or Saudi Arabia.”

Freedom for Egyptians explained the significance of King Abdullah’s remarks:

King Abdullah of Jordan is the first Middle Eastern leader admits that there is a problem in Islam. Middle Eastern countries like Egypt, Lebanon, Morocco and Saudi Arabia were attacked by Islamists’ terrorism but most defended Islam as saying this is not not the “true Islam”. King Abullah, first brave Arab leader, to admit the problem.

Today the King of Morocco joined him… 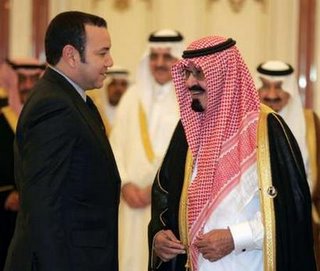 Today Morocco’s King Mohammed VI advanced the comprehensive plan on fighting terror in the Islamic world at the third special summit of the 57 member-states of the Organization of Islamic Conference (OIC):

“We must strive to achieve the highest possible degree of coordination and solidarity among us, and adopt a comprehensive approach to uproot terror, as part of a fully-fledged, ambitious reform project,” the Monarch told participants in the Mecca summit.

“We need to undertake an honest effort of introspection, pool our resources, show genuine support for each other, and adopt a realistic approach bolstered by a strong determination to achieve the progress of the Muslim Ummah and rise to security, development and culture-related challenges, mainly extremism and terrorism,” he added.

He reiterated Morocco’s “clear position which rejects all forms of terrorism, whatever their origin or devious justifications, for they are in contradiction with the tolerant teachings of Islam and with the founding principles of our policy that advocate moderation, tolerance and constructive dialogue.”

He urged Muslim leaders to unite and tackle extremists who he said had ‘hijacked’ their religion. He said the world’s one billion Muslims were weak and divided.

“It bleeds the heart of a believer to see how this glorious civilization has fallen from the height of glory to the ravine of frailty, and how its thoughts were hijacked by devilish and criminal gangs that spread havoc on earth.”

“It is here that the Islamic Fiqh Academy, with its overhauled make-up, comes into assume its historic role and responsibility in all walks of life – political, economic, cultural and social domains — to reach a stage of solidarity and God willing, to a true and fortified unity worked through strong institutions so as to restore the Ummah to its rightful place in the balance of power.”

The Saudi king also called for a reform of educational programmes in Muslim countries.

“Developing the curriculum is essential to building a tolerant Muslim personality … and to having a society that rejects isolation,” he said.

“Steeped in tolerance, such a personality will lay the foundation for a society that rejects isolationism and turns its back on courting hostility to the other by interacting with all humanity, adopting what is good and rejecting what is bad,” he maintained.

“We can no longer neglect these problems or expect others to solve them for us.”

Obviously, there is much work to be done. 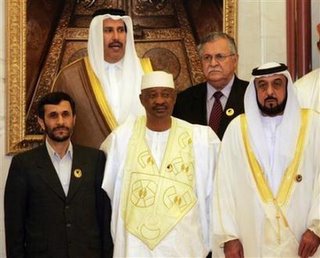 The UAE held their first ever Chamber of Commerce and Industry’s board elections in Abu Dhabi this week with much excitement. Women were allowed to vote in these historic UAE elections.

The UAE also announced this week that democracy will be taught in the first grade.

Iraq will hold elections for Parliament on December 15th where the Sunnis now say they want to take part.