Crossroads Arabia, an excellent blog on Middle Eastern and Saudi Arabian news, is reporting that the United Arab Emirates will hold democratic elections.

The pro-western Sheikh who is seen as a modernizer also said that there would be no restrictions on the participation of women in the elections. 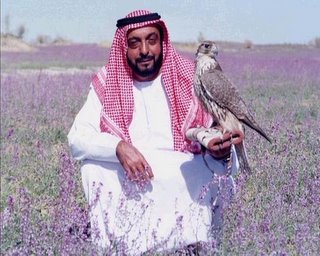 The new leader of the United Arab Emirates announced on Thursday that there would be democratic elections early next year:

United Arab Emirates (UAE) President Sheikh Khalifa bin Zayed al-Nahayan announced on Thursday that the oil-rich Gulf state is to hold its first elections, in a move towards reforms.

“We have decided to boost the role of the consultative council by electing half of its members through councils in each emirate,” Sheikh Khalifa said in an address marking the national day of the seven-member federation.

He said the process of choosing the new council would start early next year and there would be no restrictions on the participation of women. Candidates will be able to campaign on radio and television and put up billboards.

Arab News has more on this historic decision:

DUBAI, 2 December 2005 — The United Arab Emirates yesterday announced partial elections to the Federal National Council (FNC). The announcement was made on the eve of the country’s national day and 13 months after the founder of the UAE, Sheikh Zayed ibn Sultan Al-Nahayan, passed away.

The move comes amid growing American pressure on Arab countries to adopt democracy. The 22 members of the Arab League are unanimous that such changes should not be imposed by outside forces and that each country should be free to adopt its own reforms after taking into consideration the realities on the ground and domestic imperatives, particularly the tribal foundations. (blah, blah)

This article from the Arab News is interesting in several ways. First, it is acknowledging that US pressure on Middle Eastern governments to develop their own forms of representational government is actually producing results.

Second, a Saudi paper’s running this article is more than simple reportage; it’s also an endorsement of the idea.

Finally, I note that only half of the positions will be elected, with the other half appointed. This is the same half-and-half model that the Saudi government used in the municipal elections held earlier this year. While the governments are willing to take a step forward, they are not willing to take a step off a cliff–or perhaps it’s Kierkegaard’s “blind leap of faith”–that a newly elected government, with no experience and no precedent, will know how to do the right things simply through being elected.

Much more at Crossroads Arabia

Hopefully the UAE elections will go better than the elections in Egypt, where the desire for democracy is so strong that voters will climb up ladders into buildings being blocked by police out front,… just to vote! 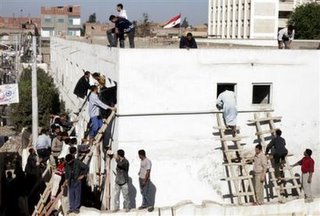 Rantings of a Sandmonkey has more on the violence and disruptions during the latest rounds of voting in Egypt.
Freedom for Egyptians is still hopeful for Egypt.
Big Pharoah explains why the Muslim Brotherhood fared so well.