After all of the attention, the VIDEOS, and the Milk-bones, the world’s first cloned dog may just be (dare I say it?) a son of a bitch after all! 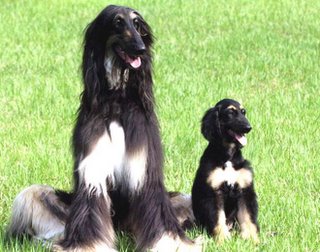 Snuppy, seen here with his father(???), may have problems adjusting to life without celebrity status.

A South Korean investigation panel looking into the work of the disgraced scientist has not reached a conclusion on Snuppy:

A South Korean investigation panel looking into the works of a disgraced scientist said on Thursday it could not yet reach a conclusion on whether his team produced the world’s first cloned dog.

The same Seoul National University panel dealt a devastating blow to scientist Hwang Woo-suk, saying there was no data to back the fundamental claim in a landmark 2005 paper that Hwang’s team had produced the world’s first tailored embryonic stem cells.

A few months after Hwang grabbed headlines with the May paper on the tailored stem cells, he was back in the spotlight again. This time it was with an Afghan hound puppy named Snuppy, which Hwang claimed was the world’s first cloned dog.

Snuppy, short for Seoul National University puppy, was born on April 24 after a normal, full-term pregnancy in a yellow Labrador surrogate mother.

Until more tests are conducted, Snuppy is in limbo.