Aljazeera was caught red-handed in a bogus Anti-American story this weekend. 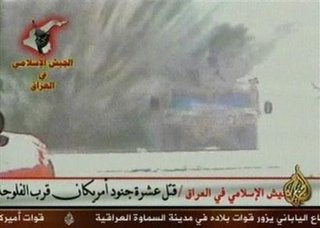 The caption to this picture from the AP does not reflect what Al-Jazeera originally reported.

This is an image made from video, claimed to be shot by the Islamic Army of Iraq, and broadcast by Al-Jazeera television on Saturday, Dec. 3, 2005 appearing to show an explosion which hit a U.S. foot patrol with a Humvee near Fallujah, Iraq. It did not explicitly link it to the attack that killed 10 Marines on Thursday, Dec 1, 2005. Al-Jazeera said it was not clear whether the footage was authentic. The Al-Jazeera announcer, however, noted the 10 Marine deaths Thursday near Fallujah as the tape aired. The video showed ground troops walking down a street on both sides of a Humvee when a huge fireball engulfed the scene, sending terrified Iraqi bystanders scrambling for their lives. (AP Photo/Al-Jazeera, AP Television News)

The actual attack that killed 10 American soldiers on Thursday happened at night in a court yard and not in a humvee.

The story is reminiscent of the bogus Newsweek story earlier in the year.

Israel arrested an Al-Jazeera reporter this weekend in the West Bank.

Aljazeera reported that Rajub, a Palestinian, was beaten up in the presence of his wife by the Israeli soldiers. His computer and mobile phone were also confiscated.

Rajub was later taken to an undisclosed location.

Walid al-Amari, Aljazeera‘s bureau chief for Jerusalem and the Palestinian territories, said: “The army simply said that he had been arrested for security reasons, and we do not know any more than that.”

The Jawa Report is saying that it was FOX News who broke this story and adds that the incident happened in a courtyard and not in a humvee.

The Reality Show is upset with those groups excusing the terrorists.

Of course, as Athena notes, this is not the first time that Aljazeera has been wrong.