Earlier this month, Mugabe told US Ambassador, Christopher Dell to “Go to Hell!” 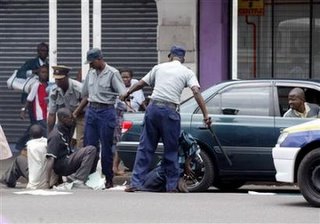 Zimbabwean National Constitutional Assembly (NCA) members are arrested by police after demonstrating for a new constitution and a boycott of the upcoming senatorial elections in Harare November 5, 2005. President Bush has widened economic sanctions against Zimbabwe, blocking the assets of an additional 128 people and 33 entities Washington says undermine democratic reform in the southern African state. (Stringer/Reuters)

The Bush Administration has imposed sanctions on high level officials from the Mugabe regime:

A statement posted on the White House Web site said Bush had issued an executive order allowing U.S. authorities to “block the property of additional persons undermining democratic processes or institutions in Zimbabwe, their immediate family members, and any persons assisting them.”

The executive order, which took effect on Wednesday, expands sanctions imposed by the United States against 77 Zimbabweans in March 2003.

Earlier this month, Zimbabwean President Robert Mugabe told the U.S. ambassador, Christopher Dell, to “go to hell” after the envoy blamed the country’s economic and political crisis on mismanagement and corrupt rule.

The Bush Administration put out the following statement:

“The United States has repeatedly called upon the government of Zimbabwe to abandon its harassment of civil society, the press, and the political opposition; to restore the rule of law; to negotiate in good faith to resolve the impasse created by the flawed 2002 elections; and to hold free and fair parliamentary elections in 2005. Such efforts have yielded insufficient results,” the statement said.

“There is still time for the government of Zimbabwe to avoid a further expansion of the sanctions list should it begin serious efforts to restore democratic norms and the rule of law,” the statement also said.

Bush’s action follows a similar measure taken in March 2003, which imposed targeted economic sanctions against 77 persons who were hindering democratic reform in Zimbabwe.

Opposition analysts in Zimbabwe applauded the sanctions on the Mugabe Regime.

Up to one third of the population of Zimbabwe will suffer from food shortage this year:

In Zimbabwe, people’s livelihoods are already under serious stress from bad harvests from the poor rains, and the recent forced evictions, which are pushing millions into serious food shortage. Added to this, declining commercial farm production, alarming number of people affected by HIV/AIDS (a quarter of the adult population), lack of basic commodities such as fuel and the general economic decline are worsening the situation.

The Mugabe government suspended three top managers of Zimbabwe’s state-owned airlines after it ran out of fuel and grounded all flights on November 22, 2005.