A new focus for the terrorists?

“I was leaving the hospital with my one-and-a-half-year-old son in my arms when the explosion happened,” said Hoda Ali, 30, wounded on her face and arms.

“I was knocked down by the force of the blast and when I came to, my son was no longer in my arms. I found him among the dead.”

How Terrorists/Insurgents continue to lose friends… 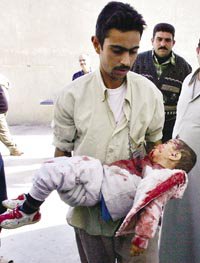 “Toys then Hell” from the Bahrain Daily News.

More Bad News for Al Qaida while toys were being handed out:

A suicide bomber attacked a hospital in Iraq yesterday while toys were being handed out to children, killing 30 people, including four police guards, three women and two children.

They were among 50 Iraqis killed in attacks yesterday.

The attack on the hospital in Mahmudiyah, 20km south of Baghdad, was the bloodiest as the bomber tried to ram a booby-trapped car into the compound.

Twenty-seven people were wounded, including four US soldiers who were handing out the toys.

Camp Katrina has more on how this story was reported by the AP and the New York Times.

This news preceded the story today about terrorists filling children’s toy dolls with explosives including grenades.

The dolls were found in a car, each one containing a grenade or other explosive, said an army statement. The government said that two men driving the car had been arrested in the western Baghdad district of Abu Ghraib.

“This is the same type of doll as that handed out on several occasions by US soldiers to children,” said government spokesman Leith Kubba.

Jim Hoft
Jim Hoft is the founder and editor of The Gateway Pundit, one of the top conservative news outlets in America. Jim was awarded the Reed Irvine Accuracy in Media Award in 2013 and is the proud recipient of the Breitbart Award for Excellence in Online Journalism from the Americans for Prosperity Foundation in May 2016.
Breaking: Gang Member Deonte Lee Murray Charged with Attempted Murder of Two LA County Sheriff's Deputies in Ambush Shooting (Video)
33 Times Joe Biden Lied or Made False Statements to the American People in Last Night's Debate
Larry C. Johnson: I Told You Long Ago, Hillary’s Team Helped Fabricate the Trump Russia Collusion Lie
IT NEVER STOPS: Senator Dick Durbin Pushes Scam that Trump Is a Likely Putin Target Because He Holds Debt - Such BS (VIDEO)
LIVE STREAM VIDEO: Fired FBI Director Testifies Before Senate Judiciary Committee
See more...