THREE PEOPLE WERE STABBED TODAY IN LAFAYETTE PARK ACROSS FROM THE WHITE HOUSE,
VIDEO HERE

Three tourists were stabbed in a park across from the White House: 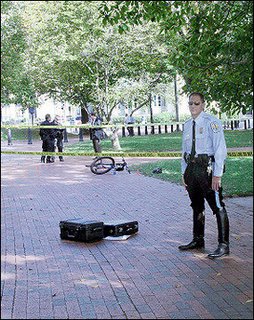 “One individual has been detained with no further information on that individual. But there are three apparent stabbing victims,” said Eric Zahren, a spokesman for the agency. Investigators did not immediately know what prompted the attack, which Zahren said took place in the northeast corner of the park.

“Another person might have had their shirt slashed,” said Sgt. Scott Fear, a spokesman for the U.S. Park Police, which was also investigating.

“Three of (the victims) were transported to a local hospital and are being treated with non-life-threatening injuries,” Fear told WUSA-TV. He said the area of the attack was closed, but the rest of the park was open and a crowd of people was gathered there having lunch.

He later said the three victims apparently were tourists and all were adults.

There was no indication that the acts of violence were related in any way to the White House.

NBC4 on the location:

Officials said a man began stabbing people in the park near 16th and H streets NW. A uniformed Secret Service officer reportedly saw what was happening and took the man into custody.

There is no word on what led to the stabbings.

Update: (4:20 PM CST) A homeless man has been charged in the attacks.