VICENTE FOX SAYS MEXICO HAS DIGNITY AND WILL NOT BE BULLIED BY CHAVEZ WHO FOX SAYS IS HURTING THE VENEZUELAN PEOPLE BY HIS ECONOMIC POLICIES,
VIDEO HERE

Vicente Fox is not flinching from Hugo’s “prickly” threats. 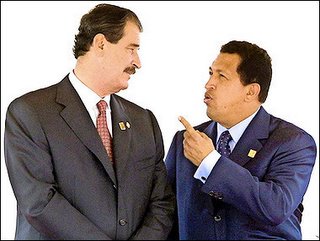 Hugo Chavez in his weekly hours long address to the people could not help himself and threatened Mexican President, Vicente Fox for siding with the United States on free trade at the Summit of the Americas in Argentina. Hugo was hoping to become the great statesman who stood up to the American Empire. Sadly, it did not turn out that way as most of the countries do not favor Marxism and 29 out of 34 wanted to continue talking about opening markets to free trade. Vicente Fox suggested to continue the talks with the countries that wished to do so which bruised Hugo’s ego. Obviously, Hugo was still smarting on Saturday when he said this:

Chavez in his weekly television program yesterday reopened a verbal spat with Fox that began when Chavez said Fox was a “puppy of the empire” for supporting the U.S.-sponsored free trade agreement for the Americas at a summit two weeks ago in Argentina.

“Don’t mess with me, sir,” Chavez said yesterday. “Or you will get pricked.”

The New York Times wrote more on the spat today:

Mr. Fox, a conservative, has been Mr. Bush’s most outspoken ally in the effort to revive the Free Trade Agreement of the Americas, standing up to the other large countries during the summit meeting. He has accused Argentina’s left-leaning president, Néstor Kirchner, of pandering to opinion polls and suggested that Mr. Chávez was divorced from reality.

Mr. Fox’s position has led him into an escalating war of words with Mr. Chávez, a former soldier who presents his socialist revolution as an alternative to United States hegemony. Mr. Fox has said on several occasions that free trade is the only way to alleviate poverty in Latin America and has said those who oppose it, like Mr. Chávez, are fooling themselves and their constituents.

In turn, Mr. Chávez, a left-wing populist unloved in Washington, has attacked Mr. Fox personally. On Friday, he called the Mexican president a “puppy dog of the empire,” and criticized his “surrender” to the United States. Then on his Sunday talk show, Mr. Chávez said that Mr. Fox had left the summit meeting “bleeding from his wound.”

Then Mr. Chávez recalled a folk song from Venezuela’s cattle country about thorn bushes. After reciting the lyrics, he warned Mr. Fox: “Don’t mess with me, sir, because you’ll come out pricked.”

However, the New York Times does fail to mention that Hugo’s socialist policies are actually Marxist policies and that there was not just the US, Canada and Mexico interested in the free trade talks but actually 29 out of the 34 Western Hemisphere countries that will continue to discuss free trade.

A. M. Mora y Leon at Publius Pundit has more.

Daniel at Venezuela News and Views is also following the situation (via Instapundit).